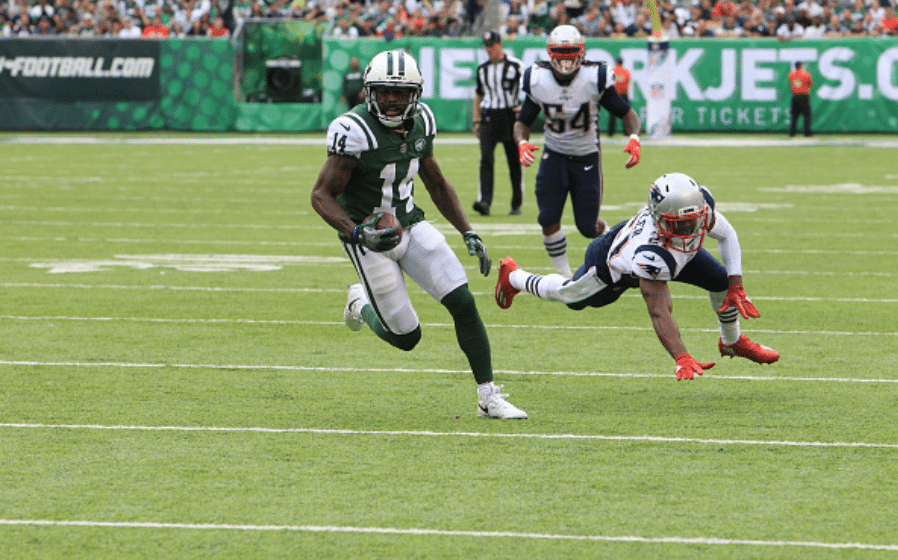 The New York Jets will be without one of their top receivers for the next few weeks.

According to ESPN NFL Insider Adam Schefter, Jeremy Kerley has been suspended four games without pay for violating the NFL’s performance-enhancing substance policy. The 28-year-old will be eligible to return on December 10 for the Jets’ Week 14 matchup against the Denver Broncos.

Jets WR Jeremy Kerley suspended without pay for the team’s next four games for violating the NFL policy on performance enhancing substances.

In his first season back with the Jets organization, Kerley has been a solid contributor to the team’s offense. Through eight games, the veteran wide receiver has 22 catches for 217 yards and a touchdown.

His suspension is due to a positive test for Turinabol. Through his agents, Select Sports Group, Kerley released this statement in regards to his suspension.

Due to Kerley’s absence, the Jets will be forced to make some adjustments to their roster over the next few weeks.

Todd Bowles on Kerley Suspension: Stewart and Hansen will get a lot more reps. #Jets will also look at bringing someone else up or bringing another receiver in.

As far as bringing a WR up to the active roster, here are the wideouts on the practice sqaud: Jalin Marshall, JoJo Natson and Damore'ea Stringfellow. Marshall returned 18 punts and 13 kickoffs his rookie year. Natson has some home-run speed and Stringfellow is a big wideout.

Head coach Todd Bowles told the media that rookies ArDarius Stewart and Chad Hansen are expected to get a lot more reps in the upcoming weeks. Bowles also noted that the team will likely add another wide receiver to the active roster.

Kerley’s suspension will be a good opportunity for Stewart and Hansen, as they will likely get more chances on offense. If one, or both, can standout over the next few weeks, they could force the organization’s hand in giving them a bigger role moving forward.

In terms of the team looking to bring another receiver in, it’s very possible that a player from the team’s practice squad could fill the void.

The Jets currently have three wideouts on their practice squad: Jalin Marshall, JoJo Nelson and Damore’ea Stringfellow. Depending on what the Jets are looking for, one of the three players has a good possibility of being added to the active roster.

Marshall might have the upper-hand, given his ability to return punts and kickoffs. However, Nelson and Stringfellow could also be in play, as they both possess some playmaking ability that could definitely benefit the Jets offense.

Losing Kerley for four weeks isn’t ideal for the Jets, who are currently 4-5 and are looking to make their way into the playoff picture. However, it could be beneficial for this young Jets team, as some more of the team’s young talent will get an opportunity to make an impact.