Matt Forte‘s career is epic. Bilal Powell is a solid vet. Young Elijah McGuire, though, needs to carry the rock more for the New York Jets.

It’s an age-old question often discussed never confusing. It applies to all sports at all levels of play across the entire globe.

When is the right time for a youngster to supplant a veteran?

The question first comes from the fan base. The first moment a rookie looks like the real deal and could be a better performer than the vet, the whispers begin. Those pesky whispers are soon replaced by roars if the team has no shot of contention.

The New York Jets of 2017 are included in the non-contention category and running back Elijah McGuire is one shiny new toy.

McGuire, 23, is a sixth-round pick of Mike Maccagnan in last spring’s NFL Draft. The Louisiana Lafayette product comes at defenders with a 5-10, 214-pound frame that brings both a spurt and a punch.

Through injury via Matt Forte or Bilal Powell, McGuire has already showcased why he was chosen in the draft as a late-round lottery ticket. Through seven games this season, he’s carried the ball at least once in all contests except for Week 1. It was until Week 4 against the Jacksonville Jaguars that saw the kid put the league on notice.

Going for 93 yards on 10 total carries, McGuire’s 69-yard scamper showed a plus acceleration for the position.

It was a 1st-and-10 play out of an 11 personnel (1 RB, 1 TE, 3 WR). The play was some sort of zone run to the left. McGuire’s one-cut ability allowed him to quickly cut up the A-gap once he realized the hole was there:

What’s important about this one isn’t his initial cut. Anybody could run through that hole. The ability showcase on this comes on the second level when he moves past the free safety and accelerates past everybody for the score.

The two major negatives for the kid coming out of college were as follows:

From what we’ve seen so far, the vision part of it has to be crossed off the list.

The week prior to the Jags game, New York picked up its first win of the season against a tough Jacksonville Jaguars squad. McGuire finished the day with 34 yards on seven carries (4.9 AVG). The following play is an example of the kid’s first instinct vision.

On a 2nd-and-8 play, the Jets came out in an 11 personnel (as the entire league usually does these days). John Morton and/or Josh McCown called a zone run out of the shotgun against a light box and a Wide 9 look that frees up both A-gaps.

A double-team on the left side defensive tackle pushed the line, but it was McGuire’s vision that got him the 10 yards on the play.

McGuire cutting at the precise moment middle linebacker Kiko Alonso was bearing down was executed perfectly in conjunction with Kelvin Beachum coming over to clean things up after the double-team.

The next example is an interesting one. McGuire rushed for 29 yards on six carries against Oakland back in Week 2.

The Jets ran a quick dive with a jet-reverse fake:

The play showcases excellent elusiveness from the rookie, but it also raises the vision concern so many scouts had coming in. 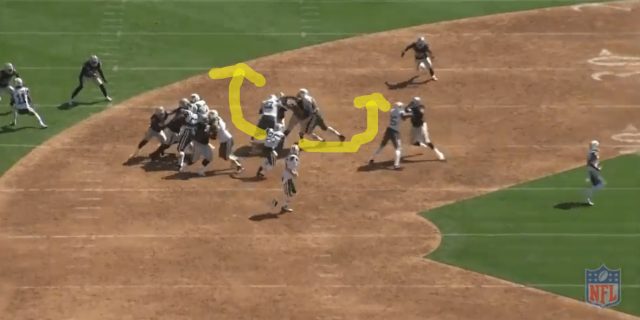 The left A-gap would probably have been a better choice than bouncing it outside — based on blocker positioning.

On a zone stretch to the left against Oakland, McGuire picked up seven while breaking a couple tackles:

No, this isn’t the first time you’ve heard, “Just get me the damn ball.” Former No. 1 Keyshawn Johnson made sure to coin that phrase over two decades ago.

But in this case as it pertains to No. 25 for the Jets, it fits.

Through his two years and change with the Jets, it’s been clear that Todd Bowles favors the veteran over the youngster. Nobody loves that guy. Nobody loves the guy who dismisses veterans quickly either, but a nice balance should be had.

Jamal Adams and Marcus Maye are quickly teaming up to be one of the league’s most dangerous safety tandems — as rooks. ArDarius Stewart is receiving somewhat of a chance at wide receiver. To this point, it’s taken injuries in the backfield for McGuire to really receive his fair share of carries.

It’s time the New York Jets change that and get Elijah McGuire the damn ball. Start him and use Bilal Powell as the nasty third-down back he actually is.