Jamal Adams was beaten on two touchdowns that went via Rob Gronkowski and he still played a solid game. It’s astonishing, actually, but that’s the way this NFL is.

Sixty offensive plays and 58 of them can be defended brilliantly. Those two that go for game-changing points will be remembered the entire week, month or even season.

Defensive backs never receive love — from the fans or how the league’s rules line up so pro-scoring.

Anyway, in the New York Jets disheartening 24-17 loss to the New England Patriots on Sunday, Gronkowski scored twice — once from two yards out on the goal line and another from 33-yards out in the second half. Many offered up the narrative that young Adams was “Gronk’d.” They took the course of action that the young rook just went through his first learning experience and will improve from here on out.

While it’s true it’ll be a learning experience, he played a lot better than those two scores indicate and the issue doesn’t lie with covering Gronk. Instead, it deals with Tom Brady. and the nature of New England’s rub and pick offense.

The first bad Adams moment of the day came on the costly defensive pass interference call that set up the Pats first score. Anybody who watched the play from a bipartisan point of view agrees: Gronk was more likely to be penalized than Adams.

The look was Cover 0. Adams was in one-on-one coverage with no safety help behind him: 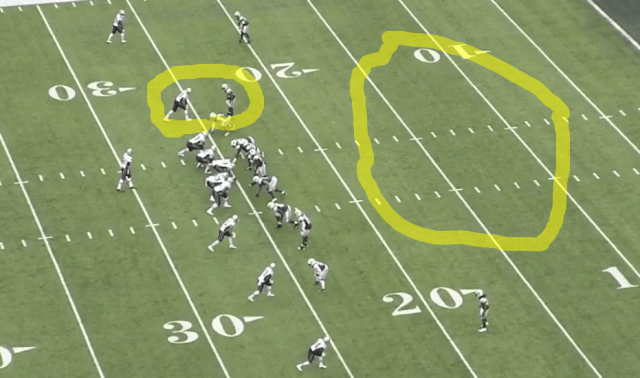 Hey, what can you do? When the mammoth tight end is literally smacking your facemask while you’re looking to cover and the officials throw a flag, it’s out of your hands.

Credit Brady for pressing the issue against the Cover 0 look. He decided to go with his guy.

On the Pats first score of the game, Gronkowski beat Adams to the flag on the goal line:

The killer on this play is what Kony Ealy does. The chip to the outside inadvertently helps Gronks momentum on the play.

It looks like a designed chip on Gronk, which is unusual for the goal line. However, Marcus Maye is free in the middle of the field. This means instead of maintaining inside leverage in one-on-one (which the normally the case across the board, especially on the outside), it looks as though Adams is maintaining outside leverage.

If the Ealy chip was the plan, Adams simply cannot get beaten to the outside like that.

The final brutal play for Adams came on the Pats first drive of the second half. In a 3rd-and-11, Bowles came at Brady with a five-man rush and a Cover 1 look (Maye deep, man-to-man everywhere else).

The following is not Gronk beating Adams. The following is Brady delivering the ball so quickly and the Pats overall offensive design which, when executed with such precision, it literally unfair.

In a tight bunch look, both Chris Hogan and Gronk run up the seem holding hands. Because Maye is free in the middle, Adams must maintain outside positioning.

It’s literally an impossible cover. The only way Adams could have made the play is if he turned into the invisible man and ran through Hogan. This is what the Pats do. Their offensive routes are so disciplined that their rubs and pick plays work to perfection.

Obviously, what’s great about No. 33 is that he won’t want to hear it. To him, any failure means a total failure. Anything less than perfection just doesn’t cut it.

But we have the ability to say he was still good on Sunday, despite the two Gronk TDs.

Check out Brady’s final stats: 20-of-38 for 257 yards, two touchdowns and one interception. He was uncomfortable the entire game, even without the Jets coming close to touching him (zero sacks). I think Brady hit the ground once during the entire game … and still, he couldn’t generate much success through the air.

That’s attributed to guys like Adams, Maye, Morris Claiborne, Darron Lee and many others.

On the first Pats drive of the game, a great example of Adams’s quick instincts to the ball limited Gronkowski to a four-yard gain. Bowles rushed five and played some version of a Cover 3 zone on the back-end. Adams immediately saw Gronk on the quick stop as the safety-valve and shut it down:

Later on a critical 3rd-down in the first quarter, Adams’s coverage on Gronk on a deep cross was picture-perfect:

On the next drive, Adams was tasked with a deep-half and played it perfectly against three verticals:

On the play prior to Gronk’s first touchdown, Adams was superb in one-on-one coverage against Gronk who even got both hands out in the attempt to create separation (as he always does):

He won’t like hearing it. It’s just the competitor in him. But Jamal Adams did play a solid game on Sunday.

It wasn’t perfect. The first TD allowed was a major mistake if the Ealy chip was intentional and he was tasked with outside leverage. Other than that mishap, it was a solid day without much action in the box score.

It’s just the nature of the safety position. So much of what they do doesn’t get noticed because the quarterback can’t go to them, challenge them.

We’ll give him a B- on the day and overall, the Jets defense was phenomenal when considering the pass rush did next to nothing.

Adams didn’t get Gronk’d. He got Brady’d on two plays.