We all understand the ASJ overturned touchdown hurt badly, but if the New York Jets just stepped on throats, it wouldn’t have mattered.

If you had been dropped from the sky and into MetLife Stadium on Sunday around 2 p.m. ET, head-scratching would have been the least of your problems.

As a newbie on the scene, you would have thought this was old Giants Stadium in 1998 with Wayne Chrebet fearlessly flying through the middle of the defense. You may have thought it was Shea Stadium with Joe Namath taking the snaps. Or you may have been looking for numbers 99, 73 and 93.

How could you know any better?

The New York Jets were convincingly beating down the champion New England Patriots. It was 14-0. Josh McCown was doing much harm to Bill Belichick’s defense. Even Jeremy Kerley was trending on Twitter. Jeremy freaking Kerley, folks.

Then, without much warning, Tom Brady happened. He took advantage of a terrible pass-interference call on Jamal Adams on one drive and hit Rob Gronkowski for the game-tying score with just nine seconds to go on another.

Fine. That stuff shouldn’t be harped on. This is No. 12 we’re discussing and to limit him to just 14 points in the first half is a win under the most disheartening of circumstances. Even McCown’s late half interception via Malcolm Butler wasn’t of the unforgivable nature. Intended target Robby Anderson needed to come back to the ball and just didn’t get it done.

The unforgivable part about the two-score blown lead comes when thinking about the Jets conservative nature as a whole.

Brady is still Brady. This defense is the exact opposite in stature. In fact, some could even argue the Jets roster is more talented than the Pats at this very moment — as long as the QB is taken out of the equation, of course. Coming into Week 6, the Pats ranked dead last in the league in yards allowed. After Sunday, they’re still dead last (surrendering 440.7 yards per game).

When the Jets found early success through the air, they needed to step on the Pats throats rather than attempting to gather a rushing attack and play the clock game.

During last February’s Super Bowl, the clock game meant everything. With Atlanta up 28-3, that’s all that mattered in the third quarter. In the second quarter of a 14-0 game with Brady as an opponent, clock and running the ball and time of possession would be the least of a team’s concerns in this day of momentum-turning football — that is, of course, if the rushing game isn’t working.

It was as clear as day what Belichick did after going down two scores. He loaded the box even more and hedged his bets that the Jets would run right into it with no success.

Extremely predictably, they did.

Up 14-0, the Jets forced a three-and-out and took possession of the ball with 11:15 to go in the second quarter. This juncture in the game was so critical. It was critical the Jets continue to pass the ball downfield against this New England defense who couldn’t stop a nosebleed. It was ridiculous how badly the Jets weapons were torching that defensive backfield.

Instead, Belichick continued to leave the box loaded and the Jets played right into his hands.

On first down, they ran the ball with Matt Forte for seven yards. On a 2nd-and-3 primed for a deep shot, McCown underthrew Robby Anderson. It was the play in which Patrick Chung was flagged for targeting, yet picked up. On 3rd-down, an ASJ play in the flat went for nothing.

On the next Pats drive, Brady took advantage of a terrible defensive pass interference call on Jamal Adams and Dion Lewis ran it in from the one. No worries. It’s still 14-7. That Pats defense is still ripe for the taking.

Forte went for seven on first down again. On a 2nd-and-3 — another prime opportunity to go play-action and stick a possible nail in the coffin, Forte got the call for two yards. On 3rd-and-1, Elijah McGuire was stuffed. 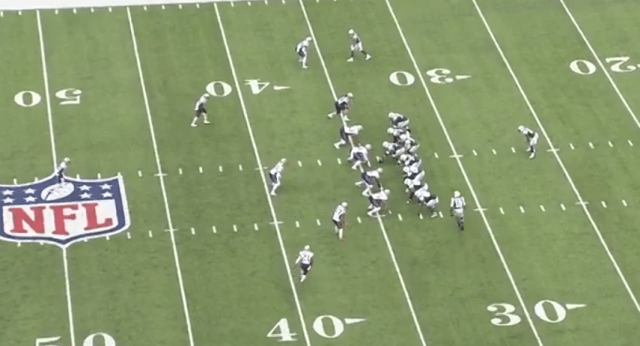 Here’s how the conservative Forte run turned out: 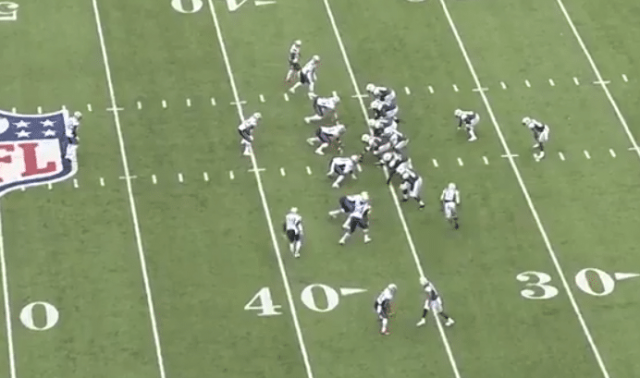 Here’s the 3rd-and-1 play resulting in a McGuire stuff:

Not once, not twice, but several times the Jets had the chance to attack downfield on short-yardage shots. They only did so once (the Anderson right sideline play).

The Pats fielded the punt and Brady proceeded to throw an interception to Buster Skrine. Yet again, New York had its chance to get that third score.

On a 1st-and-10 from their own 22-yard-line, McCown found Jermaine Kearse for nine yards — definitely a nice start and play call. On 2nd-and-1, they were again stuffed in the run game for -1 with McGuire. On 3rd-and-2, McCown was sacked for a six-yard loss. The play was a sprint out that was completely shut down.

The third quarter featured “careful” offense. Instead of attacking downfield against a one-deep look, John Morton played it in a way that attempted to keep Brady off the field. In theory, it’s a great philosophy. In reality, it’s disaster.

The Jets continued attempt to rush the ball took chances away to score points. As a team, 74 rushing yards were gained on 24 carries. That’s an average rush of 3.1. Just awful.

It wasn’t until the team fell down 24-14 that they opened the book and allowed McCown to start pushing the issue. Not surprisingly, it worked. The fourth quarter featured McCown and the Jets weapons abuse the Pats defense yet again. They scored two touchdowns in that 15 minutes of play — one of which was, of course, overturned in the NFL’s worst video replay call of all-time.

From start to finish, the conservative nature of the offense wasn’t disrespectful. It was a Rex Ryan or Herm Edwards special. Offensive coordinator John Morton does take his chance.

In the end, it just wasn’t enough. Twenty-four carries is just too much when the team is averaging three yards a pop and the defense is the worst in the land.

Bowles has done a terrific job this season. His cool and calm demeanor has spread like wildfire through the locker room and his team is fighting hard on every down (save for Muhammad Wilkerson). But his conservative offensive nature oftentimes leaves the onlooker scratching his or her head. It sometimes looks like he’s still living in the 1980s, a place that featured a much tougher aerial attack.

In today’s league, 14-0 against Tom Brady is nothing. Forget the run game. Forget the attempt to establish the rushing attack when it’s not working (3.1 yards per carry). Everytime a one-yard gain or no gain occurs is just another play added to the waste pile.

And the only reason for that is due to the nature of the league today. Fortunes and momentum changes on a dime and the opponent’s throat must be stepped on early when the opportunity clearly presents itself.

NEXT: Conspiracy Theories Rage on After Jets Loss to Pats