We break it down and attempt to make sense out of nonsense at it pertains to the overturned TD by New York Jets’ Austin Seferian-Jenkins.

One for all to agree on (unless you live in the greater New England area). Rather than barking back and forth on the legitimacy of the call, 99 percent of the included agree.

It was one of the worst video replay results in the history of the NFL.

The only aspect that can be agreed upon is that the call allows for an incredible amount of frustration to build up on one side (New York Jets) while allowing a swift wipe the brow with a deep breath in knowing you got away with one for the other (New England Patriots).

With 8:31 to go regulation, Josh McCown found Austin Seferian-Jenkins in the flat after he found nothing through his progressions. ASJ, who was a beast all day (eight receptions for 46 yards and the first touchdown of the game), fought off tacklers and hit the pylon for a big one.

The Jets moved to within three points against the defending champs, the unbeatable squad (to them). The score read 24-20 in MetLife Stadium, soon to be 24-21 with plenty of time left.

How is this a damn fumble?! https://t.co/tl1fyKAdOt

It was not to be.

Worse than witnessing the worst reversal in recent memory was the fact all fans of the green and white had to suffer hearing the words come out of Tony Corrente’s mouth while CBS was still in advertisement mode. Prior to the production heading back to Ian Eagle and onto the field, an ad for something was up on the screen while Corrente’s devilish words echoed through a stunned Jets crowd. We could barely make out what he was saying. We just knew it wasn’t good when the Pats bench exploded.

The NFL has sinced explained that the call was “pretty obvious.”

Referee Tony Corrente spoke with a pool reporter after the game and explained the ruling that was made by NFL vice president of officiating Al Riveron in New York, via Brian Costello of the New York Post.

The bottom line about the call is this: the officials feel as though ASJ never regained control of the ball after losing it.

What the confused are wondering is this: how can you reverse the play when you cannot fully tell if he regained control or not?

The one thing we can all agree upon is that ASJ absolutely lost control of the ball: 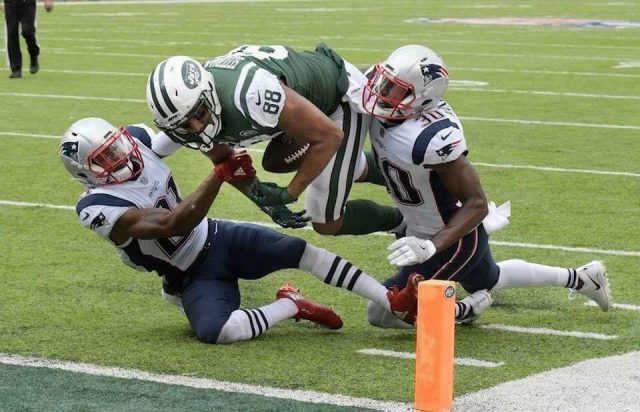 But, and this is a very big “but,” it’s very possible and probable that he regained control with his left knee in-bounds while crossing the pylon and prior to going out-of-bounds: 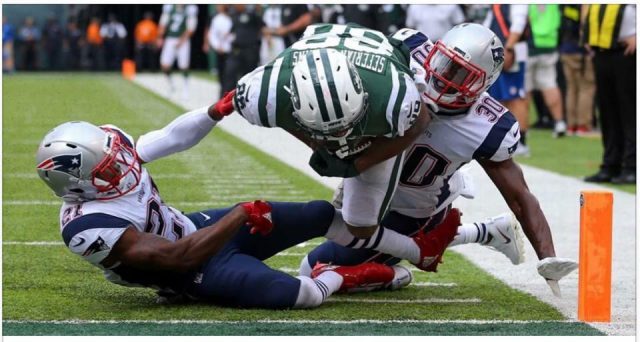 Therefore, how could this call be “completely obvious?” In fact, it seems extremely shaky. It seems as if there’s not enough for “indisputable evidence” — the very same phrase in the rulebook that exists for video replay.

A video review should only be reversed if there is “indisputable evidence.” 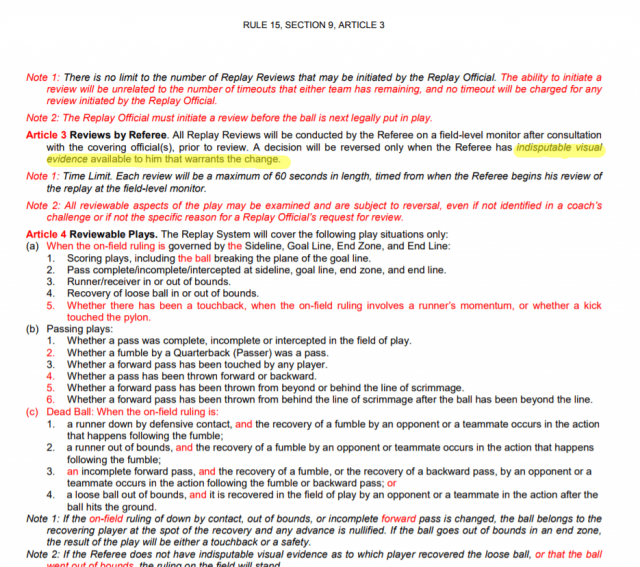 Can anybody with a sane head make a life-or-death decision in saying that he is 100 percent positive Seferian-Jenkins didn’t regain control prior to going out of bounds?

If you feel you can, you’re either a Pats fan or need the Yellow Pages.

This is simply another case of paralysis by analysis and just another reason the league is turning off fans everywhere. To add insult to injury, the quotes after the game of “pretty obvious” do double the harm.

Sorry NFL, this is a bad one. When non-Jets fans are agreeing with Jets fans, you know you have an issue on your hands.

On Sunday, the New York Jets found themselves royally screwed.