The Brooklyn Nets started the NBA preseason on the right foot, with a 115-107 win over the New York Knicks. Some key takeaways as they move on to game two.

The NBA preseason has the fanbase split. Some view it as good tidings, the legitimate season is on the way. With others, it seems almost as pointless as the All-Star game, which rarely produces effort from players.

For Nets fans this game was met with heavy anticipation, and rightfully so. This team has a new identity going forward and it’s an exciting one. That being said, some things I noticed right off the bat in preseason game number one.

D’Angelo Russell is Ready for the Spotlight

Russell came out the gate running in his Nets debut, scoring 19 points on a very efficient 7-14 from the field. He made sure to set the tone with his first three points, which came from a contested three-pointer on the wing.

Defensively, where most would say he can improve, Russell was very active. He showed no fear tonight, no mercy. Russell was scoring from the perimeter, the paint, the mid-range, and passing from the top of the key.

Yes, it was a preseason game. But this kid made sure to put his stamp on it.

Even with the returns of both Caris LeVert and Allen Crabbe imminent, this is a fantastic mix of just about everything.

It would also place the Nets’ bench among the better ones in the league.

In Lin and Russell you get plenty of passing and ample scoring, while Carroll sits as an on target scorer on the wing. Hollis-Jefferson and Mozgov are a strong rebounding front court, capable of snagging as many rebounds as any other.

It doesn’t have to be permanent, but I wouldn’t mind seeing this starting lineup on opening night come October.

DeMarre Carroll was NOT a Salary Dump

Earlier this summer, the Nets received Carroll from the Toronto Raptors in exchange for Justin Hamilton. It was a trade most media outlets labeled a salary dump. Carroll will be paid nearly $15-million this season, while still rehabbing a knee injury from 2015.

Only problem with that label? Carroll looked really good in his Nets debut. He posted 10 points and 8 rebounds on an efficient 57 percent from the field. Likely what General Manager Sean Marks was counting on when he pulled the trigger on this trade.

If Carroll can get out and produce like that every night, these Nets might be even better than expected.

“D’AngeLin” is in the Works

In this preseason opener, we’ve already seen a glimpse at how head coach Kenny Atkinson will gauge his backcourt’s minutes. The two starting guards played half of the first quarter together, but saw staggered minutes following.

Lin remained, but as soon as he was benched, Russell returned. Vice versa, vice versa, until the fourth quarter when the second unit was left to finish things up.

In a backcourt such as this, the Nets get the luxury of having one ball handler on the floor at all times. The two guards recorded a combined 7 assists in 20 minutes a piece, but Lin had his struggles early on.

Expect a similar scheme as Brooklyn heads into the season, and don’t base your opinion on what was seen tonight. These things take time.

The Brooklyn Nets ranked 26th league-wide in three-point percentage after shooting 33.8 percent per game. This was not the case against the Knicks, as the team knocked down 16 of 32 attempts from deep.

Seven Nets players connected on multiple three-pointers, with shooting guard Joe Harris leading the way. He went 4 of 7 from behind the arc, after recently telling Brian Lewis of the New York Post he wants to make that a focus this season. He’s certainly off on the right foot.

Brooklyn was ranked fourth last season in three-point attempts. This year they may find themselves benefiting off that strength, and landing those big shots.

The Brooklyn Nets will play their next preseason contest against the Miami Heat, Thursday at 7:30 PM EST.

NEXT: 5 Goals for D'Angelo Russell's Debut Season with the Brooklyn Nets 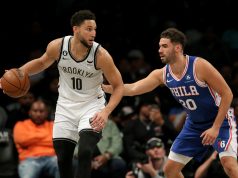 Kevin Durant is staying with Nets, according to GM he tried to have fired