This kid is a flat-out stud.

Drafted fifth overall two seasons ago, Jacksonville Jaguars cornerback Jalen Ramsey is already, arguably, the best corner in the game after just playing 19 professional games. It’s already reached the point of no return — the point in which stats can’t even begin to tell a quarter of the true story.

New York Jets fans are familiar with this narrative. For a total of eight seasons, Darrelle Revis was so good that the label of Revis Island dominated apparel and headlines. For four seasons, the man played at a level of shutdown corner that hadn’t been seen since Pro Football Hall of Fame cornerback Deion Sanders.

Suddenly, stats didn’t matter. Quarterbacks just didn’t test the man. This allowed head coaches like Rex Ryan to game plan and tweak his defenses in an unfair way, completely ignoring Revis’s side of the field.

It’s starting to reach that point with young Ramsey.

At 6-foot-1 and 209 pounds, Ramsey’s prototype is perfect for a shutdown guy. What’s more is he’s played like one this season and defensive coordinator Todd Wash hasn’t just taken notice, he’s adjusted.

The Jags love to play a single-high safety Cover 3 look. This actually flies in the face of conventional wisdom. This would usually go hand-in-hand with a solid rushing defense (with eight men in the box). What’s interesting is the Jags are currently the No. 1 pass defense in the NFL (surrendering just 124.3 yards through the air every week).

They play extremely aggressively while leaning on their corners to shut down weapons one-on-one, especially Ramsey.

In the Jags 44-7 dismantling of the Baltimore Ravens last Sunday, it was apparent that this D’s aggressiveness is afforded by the brilliance of Ramsey.

On this 3rd-and-11, Ramsey lines up atop of the screen on the right side of the defense. Normally, he’ll take the left side, but will move around the field depending on matchups. Though the defense toys with a two-deep look, it’s a classic Cover 1 robber situation (as the strong safety aggressively takes the sticks and the free safety roams deep): 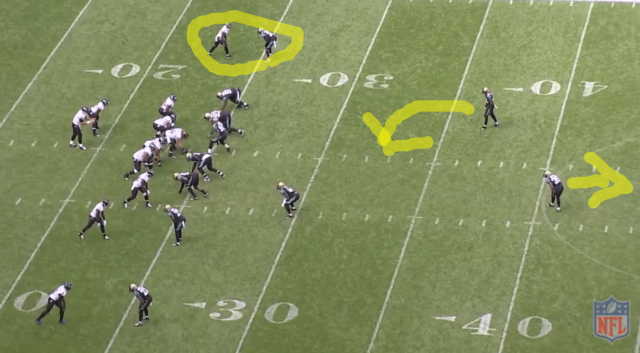 Notice how quickly both safeties react to Joe Flacco. The strong moves up quickly as did the free safety once he knew where Flacco was going. This isn’t anything out of the ordinary, but considering Ramsey’s man is on a nine-route and the safety pays very little attention to it makes it interesting:

The following is a 3rd-and-8 for the Ravens. Ramsey is lined up at the top of the screen. He provides cushion because he already knows he won’t receive any over-the-top help:

It’s a blitz. The Jags rush five, six if that man’s man, the running back, stays into block (which he does). Everybody on the backend is playing a Cover 1 man underneath.

What’s important to look at is the free safety. Do you see what his intentions are? The only possible way he’s turning the left shoulder and sprinting to help out Ramsey is if Flacco looks that way immediately. Even still, there’s no help there. The safety is all about everything other than Ramsey, leaving the young shutdown corner on an island.

How do the Jets Attack This?

This Sunday, the Jets will be provided many eight in the box looks. This is what defenses will normally do against a Josh McCown unit, but in this case, more so considering the Jags backend prowess and limitations in defending the run.

Can the Jets O-line still get a push against the loaded box? That’ll be the first question they’ll need to answer.

Who will Jalen Ramsey Cover?

If he rolls with Jermaine Kearse on every play, the Jets top WR is in for a rough one. He’ll have to be a space clearer. He’ll have to run a ton more nine-routes, crossing patterns and smoke screen stops.

The only chance the Jets have in beating Ramsey is if Robby Anderson finds room deep, much like he did against the Phins a week ago. But that’s an unlikely prospect.

Thanks to such a unique Cover 3 look/style the Jags use, similarly to the Seattle Seahawks Legion of Boom, McCown and the offensive line will have their hands full.

The team won’t want to run against a loaded box yet should be enticed to. This Jacksonville run defense hasn’t been great.

It’ll be interesting to see what unfolds over the first two or three series from a Jets offensive point of view. The running game successfully clipping off five yard rushes will go a long way into establishing terms of this contest.

Past that, limit the chances young Jalen Ramsey has in seeing the ball come his way. It may be frutiful to overthrow one on purpose his way towards Anderson (in moving the safety a little), but other than that, routes need to be run in order to get him out of the way.

NEXT: Jets vs. Jags Preview: O-Line To Be Tested