While Darron Lee has been tough to take, the New York Jets overrated defensive line is making matters much worse.

Even for the most imaginative positive fan of the New York Jets (here’s looking at you Ira from Staten Island), there’s no other way to spin it.

The Jets effort and overall execution against the Buffalo Bills and Oakland Raiders were downright appalling.

Four hundred and eight total yards of offense was yielded to Tyrod Taylor and company in the 21-12 opening Sunday loss. The Bills ran 72 plays (to the Jets 55) and went for 190 yards on the ground and 218 through the air. Then, the Raiders running attack had their way with the soft Jets up-front.

This is what’s so disappointing.

Nobody expects these guys to compete. With an offense and especially offensive line as challenged as this, 2017 is a throwaway. What’s so rough to take in and realize is that this defense should be a solid unit.

With names like Leonard Williams, Marcus Maye, Jamal Williams, Muhammad Wilkerson and second-year No. 20 first-rounder Darron Lee, the unit (behind a Super Bowl champion safety in Todd Bowles), should be the strength of the team. It should be the reason Jets fans tune in each week.

Yet this front-seven has been so poor the first two weeks that everybody’s already thrown the towel in on the Ohio State product who was selected No. 20 two drafts ago.

Thus far on the young season, Lee’s compiled 12 solo tackles, a sack and a pass defelection. What’s making him stick out on the TV screen is that when the Jets allow a gashing run that sees him flat on his back. The label of “bust” has come at the kid in full force.

Those who believe it are only half right.

Pump those brakes on the all-out bust label.

While it’s true that the kid is still lost at times, he’s not the No. 1 culprit of the defense. The No. 1 culprit is the unfilled spot of No. 98, Damon Harrison and this terribly overrated defensive line.

This man, Snacks, has left a void larger than his actual 350-pound cat-like quick frame. Whether it’s been Steve McLendon or one of the other young big nasties, nobody’s come close to filling those ridiculously giant shoes. And from that nose tackle position comes chaos along the front seven, leading to more inside backing issues, namely second-year Darron Lee.

Yes, Lee has been rough. The kid’s been tough to take. It’s so bad that nobody can justify the first-round draft status he carries with him. The kid simply cannot shed blocks and he’s always overplaying the run.

Yet this overrated defensive line isn’t making life any easier.

In the first quarter of the Oakland game, the Jets defense was faced with a 2nd-and-10. Oakland came out with two tight ends and two receivers with Marshawn Lynch as the single back. Jets, obviously, were in their base defense with Jamal Adams sniffing the box as the eighth man. 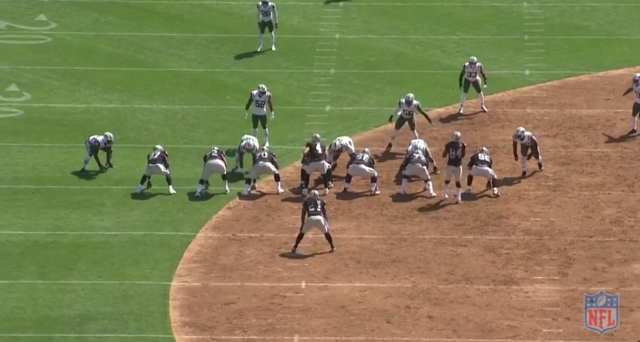 Leonard Williams is lined up on the weakside B-gap. He’s key because if QB Derek Carr reads this right, he’s going to want to run the ball to the left side where there are fewer Jets to block.

This leaves Darron Lee with the task of reading the play and either plugging the weakside A or C-gap. 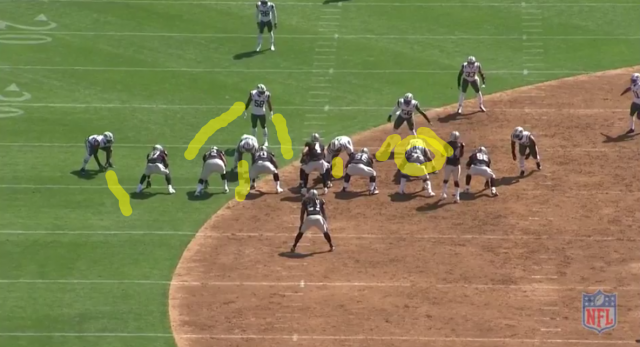 The play did run to the weakside with Beast Mode picking up four yards:

Lee didn’t feel the run correctly (in choosing the A-gap), but there’s no chance these four yards are on him. The Big Cat was absolutely dominated in a one-on-one situation. While he was held and thrown to the ground illegally, his domination led to second-level chaos. In fact, the Jets lucked out that Marcus Maye shot up so quickly and limited this one to just four.

Two plays later after a senseless Big Mo neutral zone infraction made it 3rd-and-1, the Jets relented 14 yards to Lynch.

The setup yet again, was simple, base. Base personnel was on the field for both squads. The strong side was left to the offense. 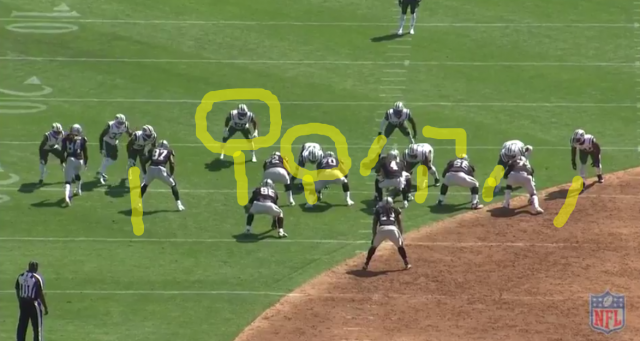 With the tight end flexed, the C-gap turned larger. This is a popular look in today’s NFL. Right off the bat, the front-seven is put in a bad situation. Defensively, they’re playing the wide side as the strong side (look at McLendon’s position), yet are over with the linebackers (Lee and Demario Davis have adjusted to the tight end motion) to the left side, making it the strong side.

Yes, pint-sized Lee was absolutely thrashed by the fullback when he looked to control the C-gap, but look at No. 97, Lawrence Thomas.

Thomas is lined up as the 3-4 DE on the left side. Although a double-team came his way, it wasn’t needed because the Raiders guard dominated him. The left tackle was afforded an opportunity to quickly get to the second level to take Davis, the Mike in this situation.

Sure, Lee was destroyed, but that line play is downright terrible. In that situation, the defensive end needs to at least hold his ground and make the running back’s hole-vision smaller. If he’s pushed back that far, forget about it. Not even Ray Lewis could make the play.

After the Kalif Raymond muff (god bless his heart), Oakland put the game away with a Lynch touchdown. But the touchdown wasn’t a foregone conclusion. In fact, it came on a 3rd-and-goal after Adams made a sensational play tracking down Lynch from behind.

On the 3rd-down score, Oakland came out with a 3 WR shotgun look. New York obviously responded with a nickel. 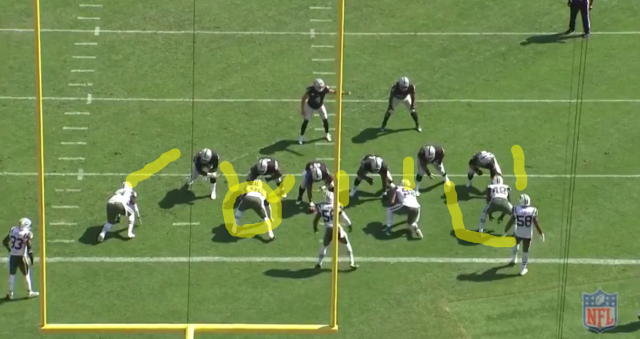 Right now, forget everything else. Simply watch Muhammad Wilkerson on the play. Watch where he starts (left defensive side defensive tackle on a four-man line) and watch where he ends up.

That effort is jaw-dropping. Lined heads up on the opposing guard, for some strange reason he shoots left into the C-gap. Actually, he doesn’t shoot. What he does is stand up with the guard and looks to read the play, which is what he’s supposed to do. But instead of actually fighting and holding his ground, he allows himself to be taken out of the play completely.

This lone action completely destroyed the integrity of the defense. It puts the linebackers in a terrible position of having to face extra blockers with more space in the area.

For those on the Darron Lee sucks bandwagon, yeah, sure, the kid has been rough. He doesn’t shed blocks well and quite often overplays his gap-filling assignments. But in no, way, shape or form is it all on him. In fact, a great case can be made that this overrated awful defensive line is culprit No. 1. They are allowing themselves to be moved at every turn and it’s destroying second-level action.

The Jets rank dead last in the league in rush defense. The unit has allowed 370 yards in total and 5.4 yards a clip. Both are league worst.

Until Leonard Williams and Muhammad Wilkerson do their jobs, Darron Lee won’t be able to do his. That’s the bottom line.