Mike Maccagnan has a tremendous opportunity to create the New York Jets defensive core four through the 2017 NFL Draft.

Mike Maccagnan has been dreaming of the moment that occurred during Thursday night’s first round of the NFL Draft. Having Jamal Adams, his top rated defensive player fall to six, was reminiscent of the 2015 draft when Leonard Williams did the same.

Couple that with the solid play of Darron Lee during the 2016 season, and Maccagnan now has the makings of a defensive “Core Four.” With a high impact player on each level of the defense, Todd Bowles should now be able to exhibit a more aggressive game plan than last year’s campaign.

The drafting of Jamal Adams could signal the end of Calvin Pryor’s time in New York. With Marcus Gilchrist on the mend, the underwhelming Pryor is the most likely casualty of the selection.

When healthy, a pair containing Gilchrist and Adams could become one of the most formidable safety pairings in the league. When given such talent, Bowles is fearless in the different looks he may throw at his offensive opponent.

Jamal Adams, the No. 6 pick in the 2017 NFL Draft via the New York Jets. #JetsDraft pic.twitter.com/ew0BFc1sag

The 2014 Arizona Cardinals had the benefit of a solid secondary which aided in Bowles’ aggressiveness of attacking the quarterback. This provided Bruce Arians a defense to lean on to get to double digit wins even with the loss of Carson Palmer at quarterback.

Gang Green will rely heavily on the defense during 2017. For one, the Jets could march out the red-shirted Christian Hackenberg at quarterback. A heavy run game would be expected if this was the case, historically a Jets trademark.

Three pieces of the “Core Four” theory are now in place. What may happen in the second or third rounds during the draft, is adding that fourth piece.

Darrelle Revis was arguably the greatest player in New York Jets franchise history. Finding a replacement may be impossible. However, this class of cornerback offers high ceiling prospects that can fill the void.

Maccagnan will be busy this evening, with the Jets potentially selecting three players, contingent on any trades that are executed. The Jets currently hold the 39, 70 and 107 selection.

The second round could play out nicely for the Jets. A running back with first round talent could fall to Maccagnan at pick 39. Dalvin Cook, Joe Mixon or Alvin Kamara would be ideal fits for New York from a skills perspective.

If the Jets are not sold on the long term potential of James Carpenter as a mainstay at guard, Maccagnan may have the choice of Forrest Lamp and Cam Robinson to solidify the line. Offensively, Maccagnan will not have to deviate from his board.

But if “Magic Mike” is looking to put the finishing touches on a feared defensive, here are names to fill the void as the fourth piece to the core:

The list is long and distinguished. Selecting a cornerback in this year’s draft will take a bit of luck and will depend on a general manager’s flavor.

The list contains names of cover guys and ball hawks. Names like Kevin King, Sidney Jones, Obi Melifonwu and Quincy Wilson have been slated as first round talents in previous mock drafts.

Ideally, Sidney Jones falling to pick 70 would benefit the New York Jets greatly. Jones, who suffered a knee injury during Washington’s pro-day has destroyed his draft stock. Unfortunate for a cornerback who rivaled Marshon Lattimore as the class of the position. 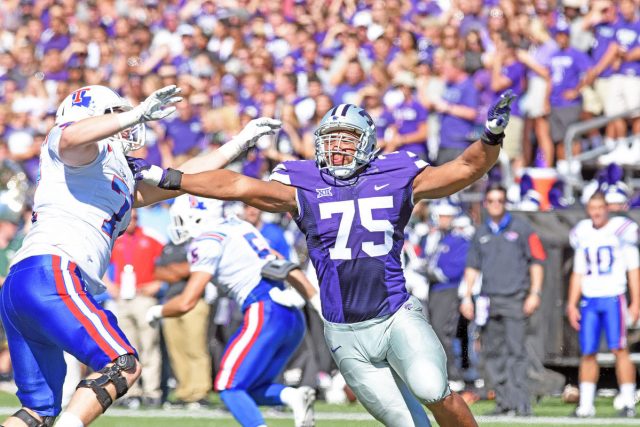 During the Mike Maccagnan and Todd Bowles tenure, defensive line has been the consistent force on the defense. This changed in 2016, when questions of motor and the desire of Muhammad Wilkerson and Sheldon Richardson arose.

Sheldon Richardson may see his bags packed at some point during the draft, as he seems most likely to depart based on Leonard Williams growth and Wilkerson’s checking account. If a deal is to be made, then depth of the line will become a question.

There are four names that seem likely replacements for Richardson. Kansas State’s Jordan Willis highlights this list, as a 4-3 linebacker, he could provide the pass rush that the Bowles defense has been missing.

Villanova’s Tanoh Kpassagnon is also a name to watch for Gang Green. Kpassagnon’s ability to create pressure from both the defensive end and tackle position will allow Bowles to create many different looks for opposing offenses.

If the Jets brass are not convinced that Marcus Gilchrist can stay healthy, going back to back safeties may not be out of the question. While Jamal Adams can provide an “in the box” nightmare for Bowles, Budda Baker can be that center-fielder to compliment.

Like Baker, N.C. State’s Josh Jones may be option to match up with Adams. Jones is exceptional in coverage, has great instincts to find the ball and possesses the athletic skills to make plays all over the gridiron.

Maccagnan may also want to address finding a replacement for the aging David Harris. Harris has been the quarterback of the defense for a very long time. Harris’ leadership skill and ability to be a sure-fire tackler has aided the stout front of the Jets.

Zach Cunningham and Raekwon McMillan seem to fit the bill as heirs to the linebacking throne. Maccagnan’s affection for players out of Ohio State, may move him ahead of Cunningham on the big board, but either option would make for a fine replacement.

NEXT: Adams is that Do-Everything Safety an Elite NFL Defense Needs