Regardless of the risks, reports continue to illustrate the New York Giants’ potential interest in Adrian Peterson.

Sports Illustrated’s Peter King is the latest to report on the rumored interest between the New York Giants and former Minnesota Vikings running back Adrian Peterson. King wrote the following recently of Peterson in his MMQB column:

“Most likely landing spots? I hear the Giants are interested.”

As expected, the Vikings declined to pick up Peterson’s contract option for 2017 worth $11.75 million. The former MVP played in three games last season, totaling just 72 yards on 37 carries with one fumble and no touchdowns. He averaged a mere 1.9 yards per carry over that span.

Peterson was sidelined for the majority of the 2016 season after tearing his meniscus in Week 2 against the Green Bay Packers. Injuries are certainly likely to take their toll on the once dominant running back in the near future. His extensive professional and collegiate injury history is outlined completely in the below chart by SportsInjuryPredictor.com. 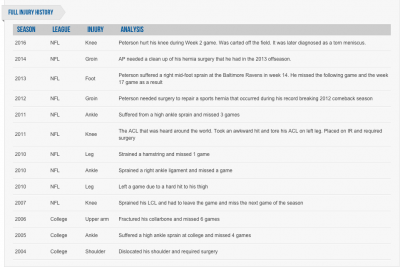 However, Peterson is not that far removed from being a dangerous running back and it’s not impossible he could potentially bounce back. A three-time NFL rushing leader, Peterson is just a season removed from a 2015 campaign in which he ran for 1,485 and 11 touchdowns on a 4.5 yards per carry average.

Peterson missed all but one game in 2014 due to disciplinary reasons following his child abuse scandal, but broke 1,000 yards rushing in all but one season prior to that since his rookie season in 2007. He’s a Hall of Fame caliber player and that shouldn’t be taken likely when weighing his odds for a comeback year.

Still, now at age 31, Big Blue management would be taking a sizable gamble by bringing AP aboard. The seven-time Pro Bowler is likely to command big money the Giants just no longer have after applying the franchise tag to Jason Pierre-Paul. With just over $13 million in cap space, Peterson would have to be willing to drop his price tag significantly for this union to make any sense at all.

NEXT: 4 Reasons the Giants Should Bring On Adrian Peterson