The New Jersey Devils’ Karl Stollery was given a five minute major for a hit that could be considered questionable at best.

At 28 seconds of the third period on Friday, New Jersey Devils defenseman Karl Stollery checked Nathan Beaulieu into the boards, resulting in a five minute major for the hit. On the ensuing powerplay, Montreal scored twice. The penalty was undoubtably the turning point in the game and the Devils three game win streak came to an end. The call however, is one that should be questioned.

The hit itself looks bad at first, but there are things to take into consideration. During the play, Beaulieu has possession of the puck and turned his back to the play, making himself vulnerable. Also, at the point of contact, Beaulieu was in the circle to the left of Schneider’s net, not pinned up against the boards. Momentum took him into the boards. 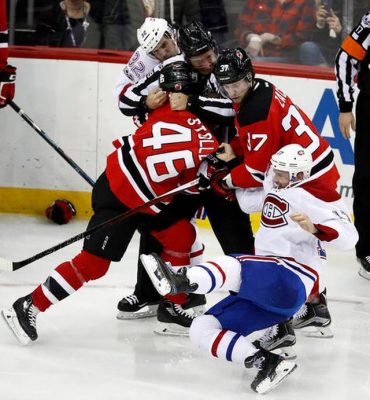 Now that’s not to say the play wasn’t penalty worthy. It was a hit from behind and worth of a two minute penalty at most. Perhaps roughing or a cross check could have been called. The league has even reached out to Devils’ coach John Hynes and admitted the call was incorrect. It is nice to see that the league can admit when a mistake has been made. However, it doesn’t change the fact that this call likely cost the Devils the game.

This is the second time a questionable call has been made during a Devils/Canadiens contest this season. Earlier in the year, Carey Price was only given an two minute penalty for attacking Devils’ forward Kyle Palimeri. There were many who wondered why Price wasn’t ejected or suspended for punching a defenseless player in the head.

Stollery wasn’t suspended for his hit and Beaulieu is not injured. He played in the Canadiens next game against the Sabres, and registered an assist in the Devils win against the Flyers. Also of note, Torrey Mitchell also received two minutes for roughing during the scrap that ensued after the hit.

While the incident did swing the game in favor of Montreal, it brings up the favorite conspiracy theory of NHL fans that the league favors the Habs. It might add fuel to that fire, but it’s just that in a conspiracy theory, and not true at all. The Habs were simply the better team and won the game, aided by an avoidable penalty.

Any call an official makes in any sport comes into question by the fans, especially when it costs one team a chance to end up in the win column. In the end, referees are human and they make mistakes like everyone else does. How does the league make this right? They can’t change the outcome of a game, or give out nonexistent draft picks. Extra salary cap room for next season?

Should the league have to make good with a team that an official made an incorrect call against at all? This isn’t the UFC where a game can be changed to no contest. If the Devils end up missing the playoffs by one or two points, one can look back at this call and wonder what might have been. For now, they will have to march forward, stay out of the box and can’t worry about the officiating.