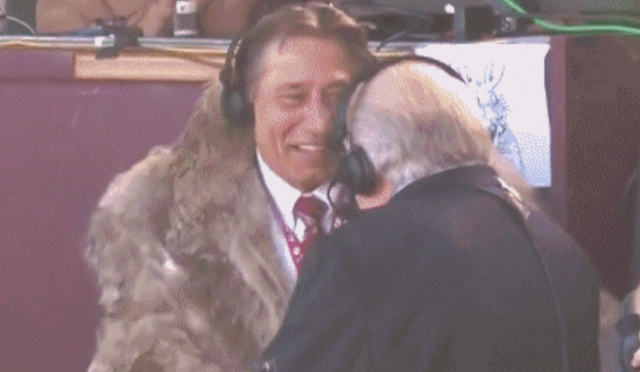 During Alabama-Auburn, the Iron Bowl, on Saturday, New York Jets legend Joe Namath broke out the fur coat on the CBS broadcast.

But did you realize another top-notch rivalry was on display?

The Iron Bowl between powerhouse Alabama and Auburn was also played on Saturday. No. 1 ranked Bama took care of the No. 13 Tigers by the final of 30-12. But it turned out that the highlight of the game came in the broadcast booth.

Not only did Joe Willie kiss the departing Verne (departing from the broadcast booth after this season), he threw on his trademark fur coat:

Joe Namath stopped by the booth for a chat…and to say a fond farewell to Verne Lundquist. #IronBowl https://t.co/Pv57BHzaFC

You be the judge. Kolber or Lundquist?

Jets’ Mekhi Becton out for season: What is an avulsion fracture?