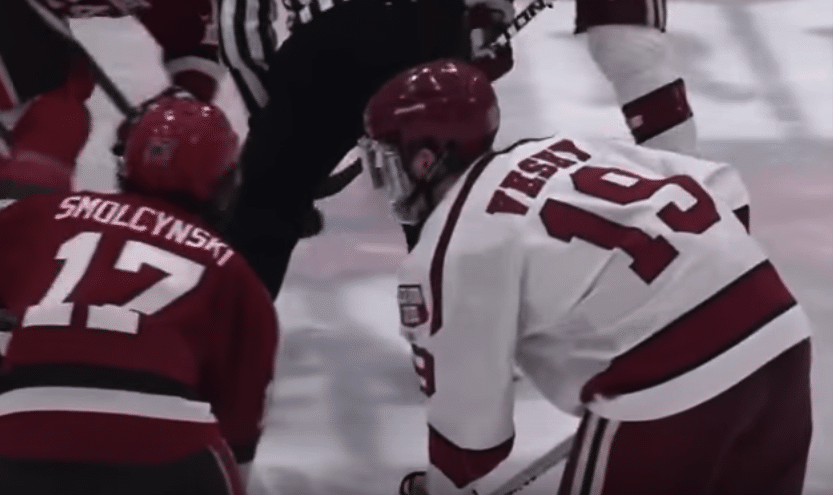 When the clock strikes midnight tonight, the Jimmy Vesey sweepstakes will have its long awaited commencement. Are the New Jersey Devils really contenders to land the coveted free agent?

Jimmy Vesey is set to hit the open market at midnight. Rumors have swirled all offseason about what jersey he will don this year.

Big franchises like the Boston Bruins, Toronto Maple Leafs, and New York Rangers have all been said to be favorites for last year’s Hobey Baker Award recipient, but one team that always seems to keep its hat in the ring is the New Jersey Devils.

Joe Haggerty of CSN recently reported that the favorites to land the Harvard product are the aforementioned Devils, Rangers, and Chicago Blackhawks.

It is obvious why Vesey would want to go to a big city like Chicago or New York, but why New Jersey?

While the Devils have struggled since their trip to the Stanley Cup finals, things seem to be heading in the right direction in the Garden State. Let’s start by acknowledging that General Manger Ray Shero absolutely fleeced Peter Chiarelli of the Edmonton Oilers when star forward Taylor Hall was sent to New Jersey in exchange for defenseman Adam Larsson.

Shero also signed RFA Kyle Palmieri to a five-year deal after he broke out last year with 30 goals. With Michael Cammalleri healthy, the addition of Vesey would create a potent top six.

The addition of Vesey would also add light to an already bright future in New Jersey. With a talented goalie in Cory Schneider and a young group of forwards, the Devils could be back on their way to glory.

The Devils were originally considered just a dark horse for Vesey. It’s time to view New Jersey as a front-runner for the 23-year old.

NEXT: New York Rangers & Jimmy Vesey: A Match Made In Blueshirt Heaven