The Brooklyn Nets are now a very miserable 0-7 as they head to Houston to take on their next opponent in James Harden and the Rockets.

It’s gotten so bad for the Brooklyn Nets that many feel as though the tanking of the 2015-16 NBA season must begin now. It makes complete sense too. Why even attempt to win games en route to a marginal season in which you’ll come up short of a terrible No. 7 or No. 8 seed in the Eastern Conference?

At the same time, why tank when your first-round pick could be swapped right from under your own feet next spring?

In any event, the Nets season will go on as tonight they’ll take on James Harden and the Rockets in Houston

Tonight, the #Nets take on the #Rockets in Houston at 8PM. Watch @YESNetwork, listen in @WFAN660. pic.twitter.com/tQkTxQHvqS

At this point most even wonder if this squad can win a game at all.

A season ago Houston took both meetings from Brooklyn. The Nets will look to reverse that trend tonight against a Harden who’s coming into the game not playing his best.

Tip-off comes your way at 8 PM ET from the Toyota Center. 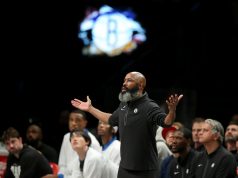