The newest Buffalo Bills linebacker, IK Enemkpali, issued an apology to everybody involved with the Geno Smith locker room punch.

Truth be told, IK Enemkpali can take this apology and shove it anywhere but near fans of the New York Jets.

With one swift knockout – whether Geno Smith instigated it or not – Enemkpali decided to place the Jets franchise in scramble mode just a few days before the official beginning to the preseason. Nobody wants to hear anything come from his mouth.

Still, you knew this was coming.

Today, as Rex Ryan and the Buffalo Bills welcomed in the newest off-the-field superstar of the NFL, an apology was issued as he spoke with reporters:

“I want to thank everybody for being here today,” Enemkpali said. “I want to apologize to the Jets organization, the fans, my teammates and the coaches. I apologize for what happened. It should have never happened. I should have walked away from the situation. It was never my intentions to hurt anybody.

“I’m just very grateful for Rex Ryan and the Buffalo Bills organization for giving me the opportunity to further my career here in 2015. I’m very grateful and thankful and happy to be a Bill. I look forward to being a good teammate, an accountable player, an accountable teammate to this organization. I’m just happy to be here and thankful. Thank you.”

IK Enemkpali: “I apologize…It should have never happened. I should have walked away from the situation.” pic.twitter.com/xs7WReTCfw

Whatever happened in the locker room that Tuesday morning is still unknown. Manish Mehta of the New York Daily News claims that Smith got in Enemkpali’s face, creating the need for the punch, according to his sources.

If that’s truly what went down, then Enemkpali will turn out to be a Jets’ hero. No starting quarterback in the NFL should ever put himself in a situation like that, solid training camp or not.

For now it’ll be the Ryan Fitzpatrick show. 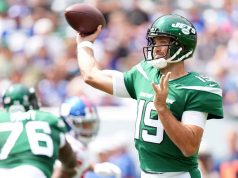 Jets to start Joe Flacco Week 1, Zach Wilson out until at least Week 4 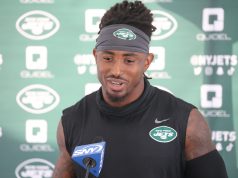 Jordan Whitehead says Jets ‘have the pieces’ to be great