Baseball’s 2022 regular-season schedule is in the books. With a day of rest for everyone (and travel for some) on Thursday, we get to gear up for an exciting afternoon of MLB postseason action on Friday.

Once the bracket was officially set and the final teams clinched a playoff spot, one thing was crystal clear. Both the American League East and National League East divisions are well represented.

This year’s postseason field features 12 teams thanks to the latest Collective Bargaining Agreement. The eastern division teams are sending a total of six squads to do battle: the Mets and Yankees, along with the Blue Jays, Rays, Phillies, and Braves.

Let’s take a quick peek at each organization’s postseason odds before Opening Day, as well as the journey they went on to get to where they currently are. All of the data we’ll be pulling here is from FanGraphs. We’ll first look at the AL East before checking out the NL East. 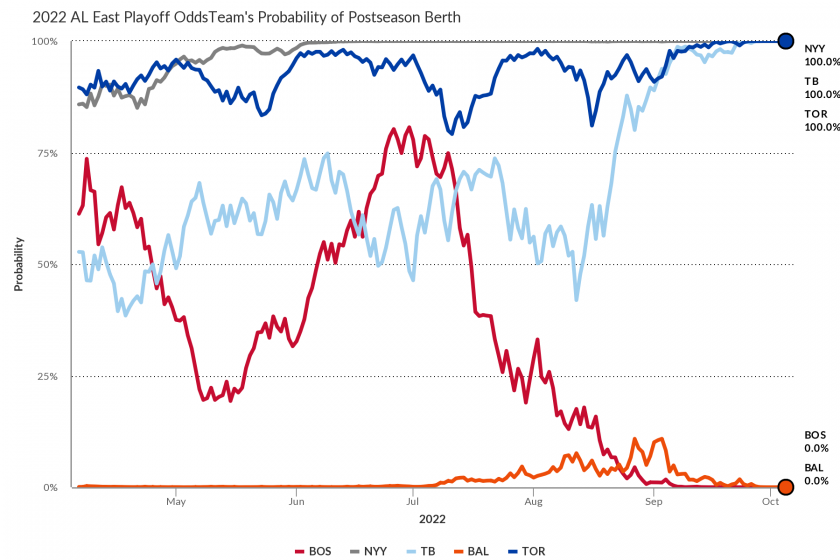 Prior to Opening Day, the Yankees weren’t favored to win their division. That honor belonged to the Blue Jays. It’s not like the Bronx Bombers weren’t expected to make the playoffs, though.

With 99 wins, they outperformed the 91.1 projection from FanGraphs. While New York’s odds of reaching the postseason was 85.8%, its chances of clinching a first-round bye stood at just 32.1%.

Obviously, New York went on a three-month tear to start the year as baseball’s best team. A summer swoon brought them back down to reality, but manager Aaron Boone’s temper got them back on track.

Even with that rough two-month stretch, there was no doubt from FanGraphs about New York’s playoff odds. They reached 99.4% on June 3rd and never got lower than that for the remainder of the regular season.

As mentioned above, Toronto was the favorite to win the American League East. They didn’t achieve that goal, but getting into the playoffs is better than not, which is what happened last year after winning 91 games. The Blue Jays won 92 games in 2022, which is right on par with the 92.4 projection.

Toronto’s 89.6% chances of making the playoffs were the American League’s highest. The same could be said about their 12.0% odds of winning the World Series.

The season was a little bit of a roller coaster for the Jays, but not any super-scary ride. Their odds fluctuated throughout the year, but they never dipped below 80.0%.

Even though Tampa Bay has limped into the postseason by losing eight of its last 10 games, they still punched a ticket to the dance. When the dust settles, that’s what matters most.

They began the year with the fourth-best odds of making the postseason…within the AL East. Those odds stood at 52.7%. Obviously, the Red Sox disappointed, and the Rays were able to both leapfrog them and hold off a surprising Orioles squad.

Similar to the Jays, the Rays’ playoff odds went on a roller coaster ride. This one was a little scarier, though. Tampa’s odds reached 75% on two different occasions but didn’t break through that number until August 22nd. 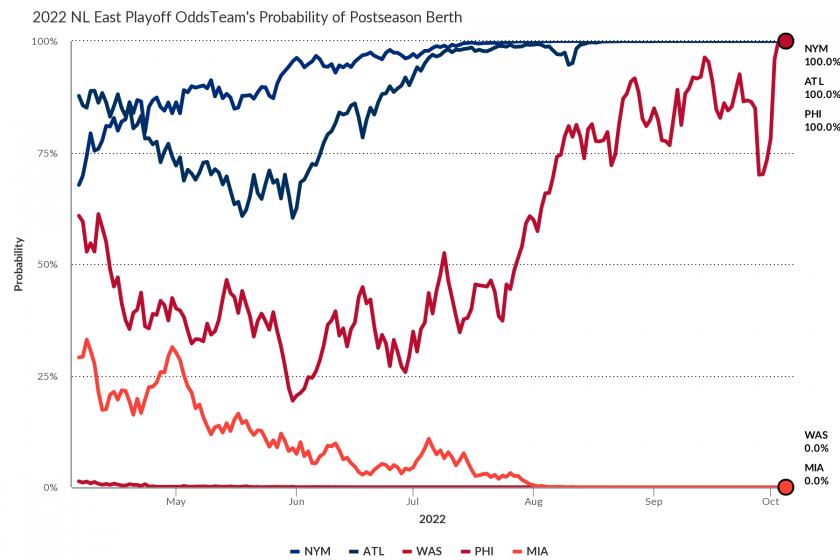 As the defending World Champs with a young nucleus that’s together until what feels like the next millennium, the Braves were expected to be where they are today. Along with 87.7% odds of returning to October, they had a 53.8% chance of winning the division, a 44.7% chance of clinching the first-round bye, and 11.7% odds of repeating as champs.

Only the Dodgers had higher odds in each of the above categories heading into the regular season.

A potential World Series hangover for Atlanta dropped its postseason odds to a season-low 60.4% on May 31st, which is when the Mets had a 10.5-game lead in the NL East. Then they got hot again — the Braves’ odds climbed back up to 86.0% just two weeks later, and the ultimately successful chase for their fifth straight division title was on from there.

Even with some disappointment about the Mets not securing the NL East crown, New York far surpassed preseason expectations. FanGraphs pegged them for 88.1 wins and gave them 67.6% odds of reaching the postseason. New York finished with its second-most wins in franchise history with 101.

Their odds of making the postseason have been quite consistent throughout the last few months, too. They crossed the 90.0% threshold on May 27th and never looked back. Those odds improve to greater than 99% on July 13th and stayed that way through Game 162.

The Phillies were an interesting case heading into Opening Day. Their offense looked formidable, while their starting rotation was strong at the top. However, the bullpen and defense were suspect. They overcame all those things and made good on the 60.9% preseason odds put on them to make the playoffs.

Philly’s lowest postseason odds also happened on May 31st. At that point in the year, their chances of returning to October stood at just 19.4%. It went back and forth between 25% and 50% until July 28th when they broke through.

A near-collapse late in the season nearly had them watching October baseball. The Phillies’ odds went from 92.6% on September 23rd to 70.2% on September 29th. But as we can see above, it immediately climbed back up.