As we sit here on Wednesday, Game 162 of MLB’s regular season is upon us. Most squads are heading home for winter once the final out is recorded this afternoon, but for 12 teams, a new war begins on Friday once the MLB postseason officially gets started.

As a reminder, the most recent Collective Bargaining Agreement between MLB and MLBPA expanded the playoffs from 10 to 12 teams. So, that one-game Wild Card playoff is no more and has been replaced with a best-of-three series. Now that the field is full and all the seeds are settled, here’s a look at the first-round matchups and beyond.

MLB Postseason Teams With a Bye

Winning a division title has always been important. It became more important when a Wild Card team was introduced in each league for the 1995 postseason. That importance increased once again when a second team was added prior to 2012.

And now, it’s become more important than ever. The division winners with the top two records in each league will get a bye from the Wild Card round. They’ll rest up and configure their rotation how they want while waiting to see who their Division Series opponent will be.

In the American League, the Houston Astros have the top seed, with the Yankees as the two-seed.

In the National League, the Los Angeles Dodgers ran away with baseball’s best record. The Atlanta Braves took hold of the NL East over the weekend and officially clinched it on Tuesday night.

What’s interesting about the Wild Card round is that the higher seed gets to host all three games.

While the Mets spent virtually all year in first place, they fumbled the bag in Atlanta last weekend and are locked in as the NL’s top Wild-Card team at the four-seed. They’ll be hosting the Padres, who are the five-seed.

The Phillies are back in the playoffs for the first time since 2011 and will be traveling to St. Louis as a six-seed to face the three-seeded Cardinals.

Both of these matchups will kick off on Friday, October 7th, and go through Sunday, October 9th (if necessary).

The Cleveland Guardians are MLB’s youngest team and secured the three-seed by winning the American League Central. They’ll be hosting the Tampa Bay Rays, who captured the final AL Wild Card spot.

The Toronto Blue Jays were a hard-luck loser in 2021, winning 91 games and not qualifying for the postseason. Not this year, though — they’re the four-seed and the AL’s top Wild Card team. They’ll be hosting the five-seed Seattle Mariners, who will officially break MLB’s longest playoff drought. Before this year, they last participated in the postseason in 2001, which was Ichiro’s rookie season.

Similar to the NL Wild Card series, the AL portion will also start on Friday, October 7th, and go through the weekend.

Whoever comes away victorious from Citi Field between the Mets and Padres will have the honor of facing the Dodgers. Before the Braves can officially start their title defense, they’ll have to wait and see if they’ll be playing the Phillies or the Cardinals.

The Division Series in each league will then begin on Tuesday, October 11th.

October is always fun, but an extra round of the MLB postseason is sure to make it even better. Buckle up, folks — it should be one heckuva ride. 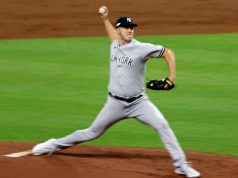