Say it with me, everyone: for the first time in six years, the New York Mets are headed to the playoffs. It’s been a wild ride between that NL Wild Card Game appearance in 2016 and the 2022 squad. A ride that’s only worthy of belonging to the Mets.

New York has gone through six (!) different managers since they last entered the playoffs. Yea, seriously. Terry Collins led that 2016 squad, and once he was done managing at the end of 2017, the Mets brought in Mickey Callaway. That…didn’t go well. Carlos Beltran’s tenure ended before he even had a chance to manage a game, giving way to Luis Rojas from 2020-21.

Then, team owner Steve Cohen got his guy in Buck Showalter, and everything has mostly been roses throughout 2022. This is a squad that still hasn’t lost more than three games in a row. Despite some slip-ups and scares at the beginning of September, they’ve now won five in a row and look to have regained the swagger they had from April through the end of August. And, most importantly, they’re ready for the stretch run.

The on-field celebration wasn’t anything over the top, but it was obvious something a little more special than normal just happened, as it should’ve been:

In his first year as Mets manager, Buck Showalter is headed back to the postseason! pic.twitter.com/VFlfJyd9oR

This is the perfect way to go about it if we’re being honest. Acknowledging the road they just traveled to accomplish this achievement while also still keeping an eye on the prize, which is the National League East division title.

Will the Mets grab their first NL East flag since 2015? That question may not be answered until their second-to-last series of the year in Atlanta against the Braves. The remainder of New York’s performance in the regular season is important and it’d be huge if they won the division to secure a bye to the NLDS. But at the end of the day, I don’t think it matters a ton. Showalter has changed the culture in this clubhouse to an “It doesn’t matter what we have to deal with, we’ll handle it and get the job done” kind of attitude.

Every postseason berth is a special experience that either causes instant goosebumps, tears of joy, or all of the above from a team’s fanbase. This one for the Mets is no different. After all, it’s only the 10th such occurrence in franchise history and just the fifth since 2000. There’s been a lot of losing in between those trips to October. Or, as many of us will refer to it, lots of character-building moments while following the Mets.

What’s different about this one, though? Think about the Mets’ last three trips to the postseason. In 2006, it was a young David Wright and Jose Reyes helping lead the charge. They had just signed long-term contracts, and even though that NLCS loss stung badly, we all thought it was the start of a sustained run of excellence. It was not.

In 2015, we thought the same thing. New York had a staff full of young aces. Once they all arrived, the Mets immediately made a run to the Fall Classic (with some help from Yoenis Cespedes and Daniel Murphy, of course). Once again, the hope was this would be the start of a competitive window.

It was great to see them reach the postseason the following year. However, getting there and immediately getting eliminated in a one-game playoff made it feel like they were barely even a part of the festivities.

But this one… this one actually feels different. It could just be the same hope we’ve had during previous moments, but we all know what’s changed since the Mets’ last trips to October. That’d be team ownership.

When Cohen took over, he put expectations on the franchise in his introductory press conference. He wanted to become the Dodgers of the East Coast. And if the Mets weren’t World Champions within the next three-to-five years, he’d be disappointed. The 2021 season was a debacle, but slowly and surely, the tide has turned. A big part of that is Showalter’s influence, and another big part of that is because of the players brought in this past offseason.

Max Scherzer, Mark Canha, Eduardo Escobar, Starling Marte, and Chris Bassitt (among others) helped provide a certain influence that was needed in the clubhouse. The squad’s whole mentality is different. Heck, they went from their most disappointing stretch of the entire season against the Cubs to winning five straight games to get back on track.

This team is built differently than in years past. Getting to October is sweet. Let’s hope the Mets make it a worthwhile trip by advancing deep into the postseason. And unlike in years past, let’s hope this actually sets the foundation for continued excellence and more playoff appearances in the near future. 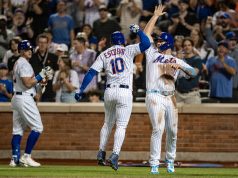