There are two very dumb things that happen every year during every professional sport’s postseason without fail.

First, it is written in the Bible somewhere that media members in one city must take a bunch of juvenile potshots about another city for no other reason than teams from the two cities are competing against each other. There is no better way to get ready to battle than to rip the other town for having crappy weather or bad bagels or something of that sort.

Second, some team must follow through with the time-honored tradition of making performative efforts to deny the other team’s fans from attending the games they will be hosting. That is where we are with the Carolina Hurricanes in advance of their second-round series with the Rangers, which begins Wednesday in Raleigh.

To better serve Carolina Hurricanes fans, a restricted sales area has been implemented for this Hurricanes game. PNC Arena is located in Raleigh, NC. Sales to this event will be restricted to residents of North Carolina, South Carolina and Southern Virginia. Residency will be based on credit card billing address. Orders by residents outside of the geo-limited area will be canceled without notice and refunds given. Please adhere to the published ticket limits. If you exceed the ticket limit, you may have any or all of your orders and tickets canceled without notice.

This is stupid for myriad reasons.

First, it’s not like Raleigh is Boston. We are talking about a nine-hour drive AT BEST for most fans in the tri-state area. And you are driving into some of the worst traffic on Earth on I-95. It’s not a convenient trip to make, and that is going to dissuade many.

Two, there are undoubtedly plenty of Rangers fans (and relatives of Rangers fans) inside the Hurricanes’ footprint to begin with. Three, these things called VPNs, scalpers and StubHub exist. And four, the fans the Hurricanes claim they are protecting aren’t even buying the tickets. 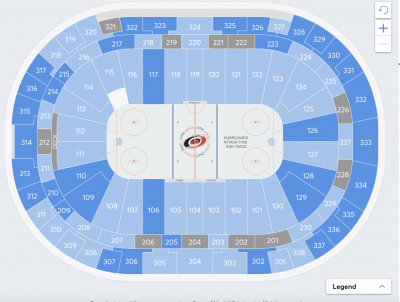 This screenshot was taken at 12:45 p.m. ET, roughly 30 hours before the puck drops. It shows a lot of empty seats. If anything, it’s proof that you can leave your house on Wednesday morning and pull up the Ticketmaster app once you cross into North Carolina with relative confidence you will be able to get seats.

But hey, what do you expect from a JV team in an irrelevant cow town? HEY-O.