Kreider might actually reach 50 goals in what’s been his breakout season.

General manager Chris Drury had himself quite the deadline, acquiring Frank Vatrano and then adding Justin Braun, Andrew Copp, and Tyler Motte.

We got to see all four of the new guys take the ice on against the New Jersey Devils. Unfortunately, that didn’t go well. The Rangers blew an early 2-0 lead by giving up 5 goals in the second period and then losing the game 7-4.

Head coach Gerard Gallant shuffled the lines and left Braun out of the lineup for the rookie Braden Schneider against the Pittsburgh Penguins. The moves he made worked and the Rangers have now won two in a row and look great.

Vatrano is thriving as the number one RW. Alexis Lafrenière is back as the 3LW and looks almost better than ever alongside Filip Chytil.

Motte is looking like the best fourth liner the Rangers have had in years. K’Andre Miller and Jacob Trouba have been the team’s best defensemen and it isn’t particularly close.

The fact that the Rangers aren’t having to rely on Igor Shesterkin to drag them through games as much is incredibly relieving and worth celebrating.

The Rangers are becoming very well-rounded and several guys are stepping up, but no one had the week that Chris Kreider did.

Check out last week’s player of the week and honorable mentions here.

Kreider’s incredible season is still just that. He recorded 6 points in three games and is now at 44 goals on the season. The dude just can’t stop scoring. He and Mika Zibanejad continue to be lethal on that top line, regardless of who is on the right.

The speed ☑️
The shot ☑️

Kreider was the team’s second-best player against the Devils and the their best against the Penguins. In that game, he earned a Game Score of 4.74, tied for his highest on the season.

We learned a lot about these Rangers from this week of play. They got better and deeper at the deadline, but their best players are still their most important ones.

Kreider, one of the team’s MVPs this season, still is one and the Rangers won’t do well if he doesn’t do well, regardless of anything else. It’s crucial that he maintain this play and by the looks of it, that shouldn’t be a problem. 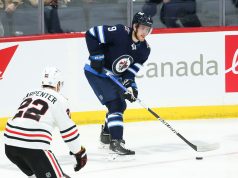