A look at the best and worst players on a Rangers team that’s taken the league by storm.

The New York Rangers are one of the best teams in the league halfway through the 2021-22 season. Is that something you expected to read four months ago?

This team isn’t perfect and has several holes to fill, but they’ve exceeded expectations and beaten the odds to become one of the most difficult groups to play against. They sit tied for first place in points in the most difficult division in the league and that’s an indication that much is going well.

The front office has been doing a solid job and Gerard Gallant, who should at least be a Jack Adams finalist at the end of the season, is making all the difference in the world, but credit must be given to the players as well.

Let’s give out some player awards to the Rangers who are going above and beyond as well as those who have room to improve.

Shesterkin is the Rangers’ MVP this season and deserves to be a finalist for the Hart (league MVP) come the summer. We just mentioned that the Rangers have been incredibly impressive this season. That hasn’t always been the case.

They went through a rough spell earlier on and the only reason they got out with as many points as they did is Shesterkin. 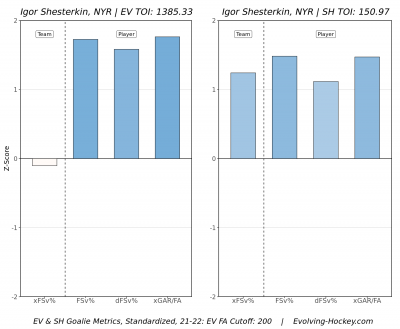 Shesterkin is currently the best goaltender on the planet and could run away with the Vezina Trophy. He leads the league in most categories, including goals saved above expected, and does practically everything well. 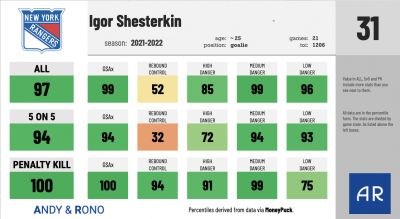 Watching Shesterkin handle the puck is a pleasure, as well, and many big plays the Rangers have made in their opponent’s zone began with him.

Many Rangers are having a fantastic season, that’s why they’re in this situation, but none are doing it better than Shesterkin and none have been more valuable on a consistent basis.

The impact Shesterkin is having on his team is incredibly similar to that of his mentor and predecessor, Henrik Lundqvist, and the Rangers are so lucky to have the most valuable of goalies for the second-straight era.

This one was quite easy. Nemeth has been the Rangers’ worst player this season and it isn’t particularly close. 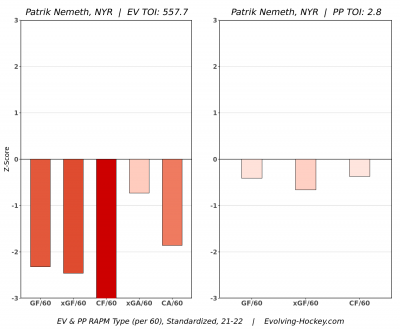 Nemeth had been one of the best defensive-defensemen in the NHL over the past few seasons and that’s why the Rangers wanted to add him. They needed a veteran LHD who was good in his own zone and it looked like they nailed this acquisition.

However, a dreadful playoff run with the Colorado Avalanche to end the 2020-21 season seemed to mark the beginning of an ugly stretch for Nemeth, one that’s ongoing. 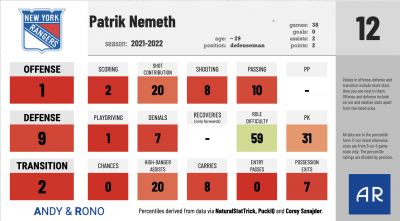 Nemeth has been terrible in more than one way. Other than the fact that he’s awful on the ice, he’s been a nightmare for his partners.

He began the season paired with Nils Lundkvist, the team’s best prospect heading into the season and the best defenseman in the SHL last season.

Lundkvist’s own play has been disappointing and it’s wrong to blame others for his shortcomings, but playing alongside as bad of a player as Nemeth definitely didn’t help at all.

We can’t help but wonder what Lundkvist’s situation would be had he played more minutes with literally anyone else.

Nemeth is currently away from the team for personal reasons, but Gallant is honestly running out of reasons to keep him in the lineup when he does return. 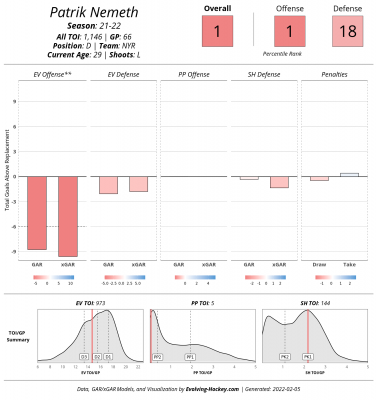 Nemeth is a liability in every possible way and simply cannot be given ice time in the regular season or playoffs.

This seemed like a good pickup at the time, but Nemeth isn’t panning out and the Rangers must move on from him.

As we’ve mentioned all throughout, many Rangers have been impressive this season. None more so than Kreider, however. Seeing what Kreider is doing this season feels like a fever dream.

The potential was always there, but after all these years, no one ever thought he’d end up leading the entire league in goals.

Kreider has been absolutely incredible in every way. He has 33 goals and 47 points in 47 games and is a phenomenal two-way forward. Gallant values him as a top player in literally all situations and Kreider has been key in New York’s success. 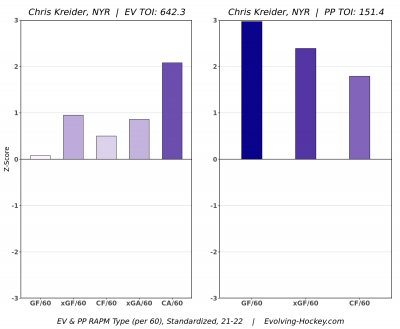 Kreider has to be impressing everyone, including himself, and no one would’ve thought he’d be the team’s best and most important forward this season. 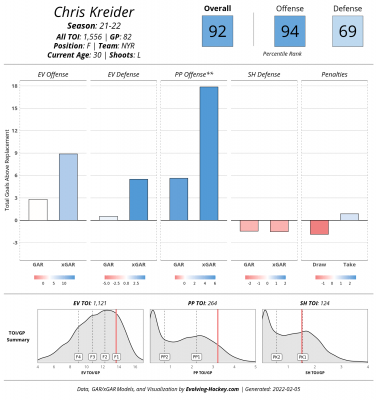 Kreider’s versatility has also been incredibly impressive. Gallant has used him on both wings and he’s been able to produce at both positions. 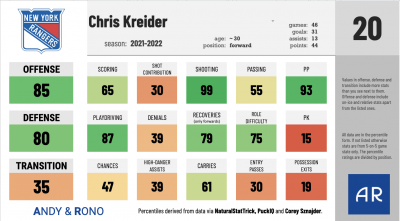 It’s going to be essential for Kreider to take this elite play into the second half of the season and then the playoffs because the Rangers absolutely can’t get far without him producing at this level.

Nemeth is definitely an obvious candidate for most disappointing because of the fact that he was expected to be much better than he has been, but we have to give this award to Chytil, who was supposed to turn into a top player.

Chytil’s development definitely hasn’t been smooth over the years and his injury history doesn’t help (he even got hurt before this year’s All-Star break). But he’s shown flashes of brilliance and has proven why he was a top draft pick and prospect.

This should’ve been his breakout year and the season in which he took a giant step forward. That hasn’t been the case at all. 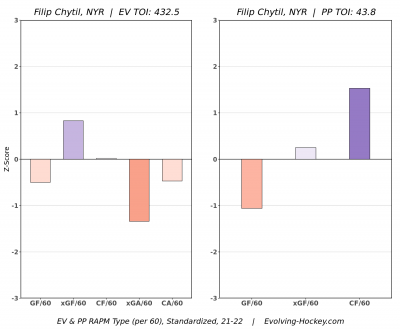 Chytil has looked great as a playdriver and playmaker at times and the Rangers’ third line has done well creating offense when other lines haven’t. 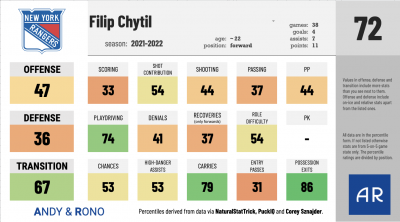 However, what Chytil is doing isn’t enough and the fact that he’s been a poor defender and finisher makes it so hard to watch him.

The Rangers have botched things with the youngster, too. He simply isn’t good as a center and would definitely play much better on the wing, as we’ve seen in the past. 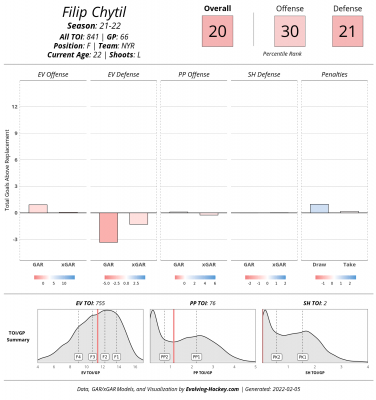 But even so, Chytil should be better than he is and an indication of that is that the Rangers had hope for him to become their second-line center of the future.

That seems to be out of the question now and he could very well be traded at the deadline for a proper top centerman. If that is the case, we’ll always wonder what could’ve happened if things went better for the youngster with such a high ceiling.

There honestly aren’t many great options to choose from, but Goodrow has definitely been the Rangers’ best new player. After signing a six-year deal worth over $21 million, we would hope that’s the case.

Goodrow has had a strange season. He definitely hasn’t been great and leaves much to be desired. Goodrow is usually a defense-first bottom-six forward who doesn’t provide much offense.

With the Rangers, he’s been pretty awful in his own zone but is actually scoring. The fact that he plays as a middle-six forward is definitely a contributing factor. 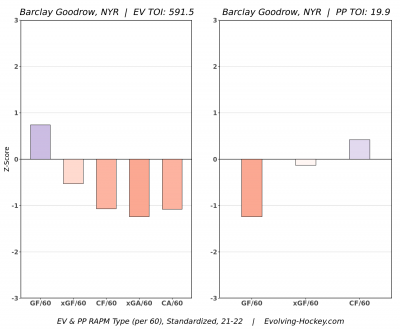 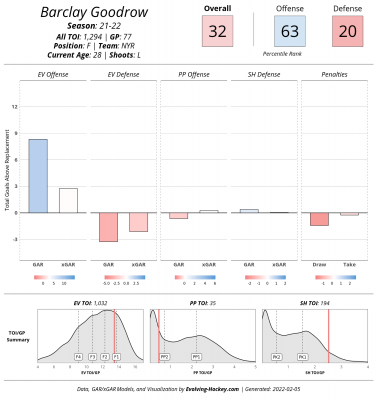 It would be nice to see Goodrow defend better, especially since that’s what the Rangers expected from him when they acquired him, but he is providing the team with much-needed offense, especially to a top-six that’s depleted at RW. 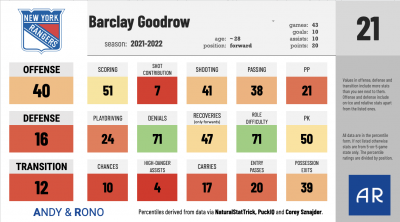 Goodrow certainly is overpaid and his contract will cause problems for the Rangers down the road, but his play has improved by the week and he provides scoring and depth to a team that desperately needs both.