It’s been a long year. But Mets cans can be thankful.

It’s Thanksgiving, and many are considering the things they’re thankful for in their lives.

Mets fans haven’t had an easy 2021. That might be an understatement, honestly. Two GMs have been dismissed in humiliating fashion and the team set a record for the amount of time in first place only to finish under .500 for the season.

But there are at least a few things fans should be thankful for this year. Here’s our list. 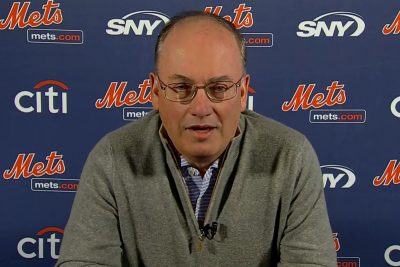 Steve Cohen is loaded. That isn’t breaking news. But the Wilpons had a lot of money when they bought the team.

The difference is clear already: Cohen is willing to spend money to improve the team. He handed Francisco Lindor the richest contract ever for a shortstop and has given his new general manager the ability to spend what he needs to make the team competitive.

The question now is whether or not players want to take the money and play at Citi Field. The Mets still need a manager and have plenty of holes to fill. This is going to be a competitive free agent market, so Cohen is going to have to put his money where his words have already been.

As the rest of baseball focuses on arguably the best free agent class at a single position in the history of the game, the Mets don’t need to worry about their shortstop.

Lindor is signed for ten more years, and he’s a legitimate superstar. His first year with the Mets wasn’t what he or the fans had hoped for, but history shows us that Lindor has the ability to be a game-changing talent.

The Mets have plenty of needs this winter. And a big portion of the rest of Major League Baseball has entered the deepest, best free agent class at a position — shortstop — in big league history. From Corey Seager and Carlos Correa to Trevor Story, Javier Baez and Marcus Semien, these guys are going to get paid. The Mets don’t need to get into that bidding war (granted, they kind of set the market).

It’s now up to Billy Eppler to build around Lindor for the next decade.

The Best Pitcher on the Planet

Yes, that’s right: Jacob deGrom is the best pitcher on the planet. He started the 2021 season with arguably the best couple months of his career. Unfortunately, his injury-shortened season became one of the key reasons the Mets fell apart down the stretch.

The time off should give deGrom enough time to get his body right so he can come back and dominate in 2022. Hopefully.

Mets fans have a history of enjoying some of the elite pitching in the history of the game. From Tom Seaver to Dwight Gooden, the Mets’ aces have traditionally been elite. And deGrom is on their Mount Rushmore.

Here’s hoping deGrom comes back healthy, Lindor bounces back and Cohen spends his money wisely so Mets fans have more to be thankful for in 2022.

Jose Quintana gets 2-year deal with Mets, who keep filling out rotation

Another Mets-Dodgers bidding war could be brewing for Shohei Ohtani

Who will be biggest threat to Mets’ chances of re-signing Brandon Nimmo?