The reigning Norris Trophy winner signed a seven-year, $66.5 million extension with the Rangers.

The day New York Rangers fans were anticipating came on Monday. The Rangers extended RHD Adam Fox to a seven-year deal with an AAV of $9.5 million. This is a bargain for the 23-year-old.

Sometimes we think to ourselves, we can’t believe he’s ours.

And now he’s ours for seven more years. pic.twitter.com/xZY9ZiqN2T

Fox, who is the reigning Norris Trophy winner, is the best defenseman in the NHL and has been nothing but elite since making his NHL debut in 2019. 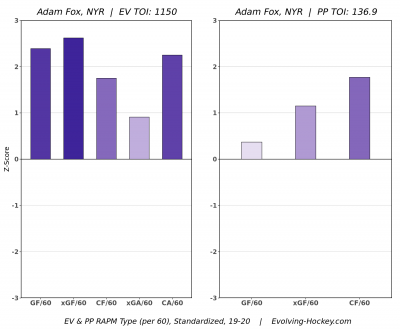 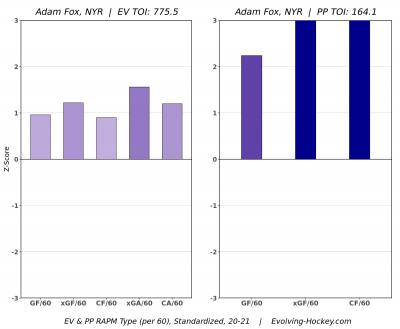 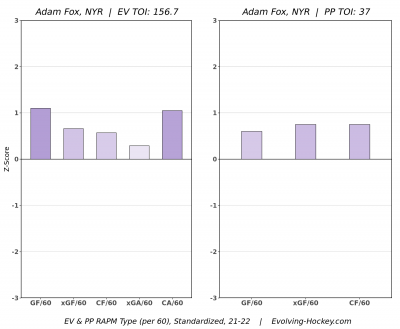 It was surprising that he didn’t win the Calder Trophy after his fantastic rookie season, but he did was awarded the Norris a season later.

Just two seasons into his NHL career, Fox is a Norris Trophy winner and has established himself as one of the best defensemen in the NHL. He’s been the absolute best for over a season now.

Adam Fox, extended 7x$9.5M by NYR, is arguably the top defenceman in the NHL, an elite two-way talent whose uncanny hockey I.Q. has led to amazing impacts at both ends of the ice. #NYR pic.twitter.com/0zusLofkEn

The New York Rangers have re-signed Adam Fox to seven-year deal with $9.5M per year! The last winner of the James Norris Memorial Trophy has been TOP10 defenseman in the NHL since he arrived there. He's great player and this contract should be fine for the Rangers. pic.twitter.com/PRoABHHwZx

Fox is an elite defenseman in all situations. He’s phenomenal defensively, but is also one of the highest-scoring defensemen in the league.

For that reason, he’s the quarterback of the Rangers’ power play, which doesn’t get much done without him. He’s also one of the team’s most important players on the penalty kill.

Adam Fox (7×9.5m extension with the rangers) is a very strong creator of offence both at 5v5 and at 5v4 and a very strong 5v5 defender. pic.twitter.com/WjIvguDZXe

Fox’s contract is historic: it’s the largest deal signed by a player leaving his entry-level contract. This is what his contract looks like in comparison to other notable defensemen in the NHL:

Fox is so great that the Rangers are actually undervaluing him.

The Rangers are paying a lot for Adam Fox with a $9.5 million cap hit, but that'll stay below market value for the elite defender #NYR pic.twitter.com/lLXF35QXpP

It seems to be general consensus that the Rangers got a steal here. Fox is the best Rangers defenseman since the great Brian Leetch and he’s only in his third season.

It’s also worth noting that Fox will only be 30 years old when his deal is up, still in his prime. Could the captaincy be next for the NHL’s best blueliner?