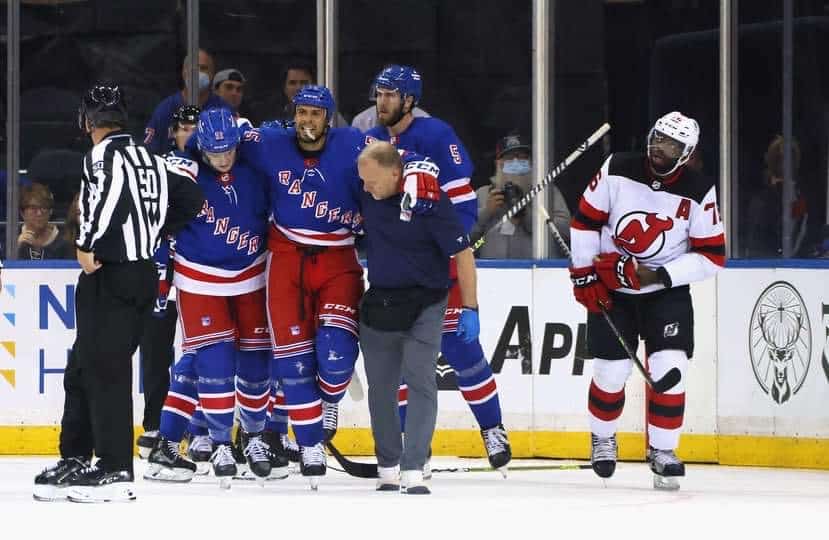 The Rangers may have suffered a big loss during an overwhelming preseason win on Wednesday night.

On Wednesday night, the Rangers visited the Devils for a preseason game. We’re exactly one week from the start of the NHL regular season, so at this point veteran players are working on chemistry with new teammates, timing and getting back into the swing of the game.

And a big one happened to the Rangers in this rivalry (preseason) game the Rangers won 6-2… for whatever that’s worth.

At the mid-point of the first period, new Rangers forward Ryan Reaves followed a puck into the corner. New Jersey’s PK Subban followed him and their legs got tangled up. The result was an awful, ugly fall for Reaves who needed to be helped off the ice.

Ryan Reaves injured in preseason after getting tangled with PK Subban pic.twitter.com/YLvhgrUmqY

We’ll let you be the judge if the play by Subban was clean or not.

But some folks clearly think it was dirty.

Colby Cohen, a former NHL player who is now a content creator working for the Chicago Blackhawks, called Subban’s play into question openly on Twitter.

Hope Reavo is ok. This looks a heck of a lot like a slu foot. Not ok. https://t.co/CQPccrBCcp

Rangers’ forward Chris Kreider didn’t like it, either. He exchanged words with Subban after Reaves was helped off the ice in the first period. He then dropped the gloves with Subban right off the drop of the puck to start the second period.

Kreider piled up 17 penalty minutes in the game.

Subban wasn’t having it, though. When Kreider was back on the ice to start the third period, Subban turned on the dance music and they fought again.

We’re still waiting for word on how back Reaves’ injury is, but it looked bad. And the Rangers have the Capitals — and Tom Wilson — on Opening Night.