Analysts love the guys protecting the crease for the Islanders, Rangers.

On Tuesday morning, Greg Wyshynski at ESPN published an interesting ranking of the NHL’s goaltending tandems as we get ready for the 2021-22 season.

After a volatile offseason that saw significant movement at the position — including the reigning Vezina Trophy winner being traded for literally nothing — the changes in this year’s rankings are dramatic.

Wyshynski’s rankings “were formulated through discussions with a variety of goalie experts — coaches, analytics gurus, former players — as well as through stats from sites like Evolving Hockey, Money Puck and Hockey Reference.”

The tandems for the New York Islanders and New York Rangers ranked among the best in the league, with the Islanders grabbing the top spot overall.

Here’s what the article has to say about the Islanders, Rangers and New Jersey Devils.

Comments: “As easy as it is for a goalie to play for coach Barry Trotz, it’s equally as hard to be seen as something more than a product of his system. His four-season run in Washington saw the Capitals finish second in the NHL in goals-against average (2.45) during his tenure. During his three seasons with the Islanders, they’ve led the league in team defense (2.46 goals against per game).

“Varlamov led the NHL in save percentage (.929) last season among goalies with at least 30 starts, and tied Philipp Grubauer with seven shutouts to lead the league. Grubauer got a Vezina Trophy nomination. Varlamov did not. Nor did Sorokin get any Calder Trophy love, finishing 15th in the voting. Varlamov also didn’t crack the top 10 in our ranking of goalies as voted on by NHL players, coaches and executives last spring.

“So we’ll give them their due here. Both would be solid goaltenders on another team. Within this system, they’re the NHL’s best tandem. Varlamov is an athletic veteran whose underlying numbers from Clear Sight Analytics had him as the NHL’s third best goalie last season. His 0.961 expected save percentage on unblocked shots was best in the league last season. Sorokin looked better and better as his rookie season went on, and with a season in the NHL (and living in the U.S.) under his belt, he’s going to have an outstanding sophomore campaign.

“The Trotz System is the NHL’s most effective defensive scheme. His Russian netminders are the foundation on which it’s built.”

Comments: “The Rangers shocked some people when they handed Shesterkin a four-year, $22.7 million extension, which was the richest ever for a goalie on his second contract. New York goaltending legend Mike Richter was not one of those people: ‘Shesterkin was good enough to give them the ability to think that it’s OK not to sign [Henrik Lundqvist],’ Richter told the NY Post in August. ‘Those guys don’t come along much. So when you have them, you hold on to them, and that’s why it was a wise signing.’

“According to Clear Sight Analytics’ numbers, Shesterkin, 26, and Georgiev, 25, combined for the second most goals saved above average in the NHL last season. There are a few concerns here — a lack of experience playing in meaningful NHL games, Shesterkin’s propensity for lower-body injuries — but this is a solid duo on which new coach Gerard Gallant can build.”

The rest of the top ten ranked this way:

The Devils didn’t crack the top ten overall. That shouldn’t come as a surprise, even though they added Jonathan Bernier this summer.

But where did ESPN’s analysis have them overall in the league? 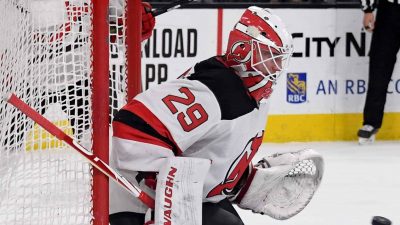 Comments: “Clear Sight Analytics has the Devils ranked No. 10 overall in the preseason, in combined goals saved above average. As a tandem, these two do have promise. Blackwood had a struggle last season after a bout with COVID, and the Devils struggled last season overall in goal, finishing with a .891 team save percentage, 30th in the NHL. Bernier is a solid fix for that, having braved the net in Detroit for three seasons. He’ll push Blackwood and replace him if necessary.

“The Devils also improved their defense corps over last season, and their goaltenders should benefit from it.

“‘I think Blackwood is a stud, and I’d have that tandem around 20,’ said one goaltending expert.”