The Rangers add toughness and forward depth as they look to return to the playoffs.

One of the most successful teams of the 2010s, the New York Rangers have been rebuilding over the past few seasons and might finally be ready to become contenders again.

They were impressive in 2020-21 and would have made the playoffs had they played in any other division.

The new leadership went on to make significant changes to improve the roster heading into the 2021-22 season with the goal of making the playoffs in mind.

With the season fast approaching, let’s take a look at players the Rangers bid farewell and acquired this offseason.

RW Sammy Blais has been placed in a tough situation. As the player the Rangers received in exchange for Buchnevich, fans will have some bitter feelings watching him take the ice in his Rangers debut.

Blais isn’t nearly the player Buchnevich is, scoring eight goals and 15 points in 36 games last year while being a poorer defensive forward. The fact that he’s still just 25 years old is what he has going for him. 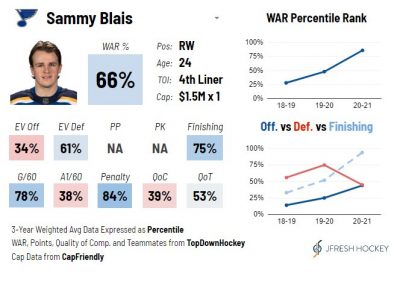 Sammy Blais is a slightly below average player without much upside on either end of the ice pic.twitter.com/sAteRDwRcP

The St. Louis Blues have acquired Pavel Buchnevich from the New York Rangers in the exchange for Sammy Blais and 2nd round draft pick 2022. Buchnevich is still underrated player and great add for the Blues in our eyes. Right now we're curious on his new contract. pic.twitter.com/iK8ibczeoC

Blais will likely start the season as the fourth line right winger, but his role there won’t be guaranteed long-term given the team’s newfound depth at the forward position.

The signing of F Barclay Goodrow was the Rangers’ big acquisition of the offseason. The Rangers made it a point to add strength and grit to their lineup and they did so by acquiring Goodrow.

Goodrow is coming off a good season in which he scored six goals and 20 points while doing very well defensively. He’s a solid player who was crucial to the Lightning in their Cup runs and will absolutely bolster the Rangers’ middle/bottom-six.

The New York Rangers have acquired Barclay Goodrow from the Tampa Bay Lightning in exchange for 7th round draft pick 2022. Goodrow is pending UFA. If he signs there, it'd be great pick up for the Rangers. pic.twitter.com/wsnNfeAgfB 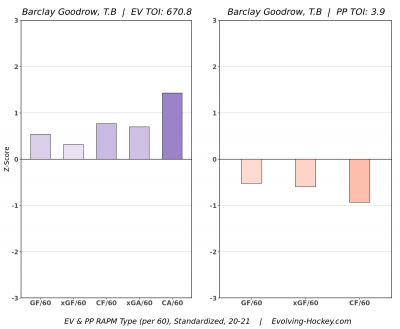 However, there are two potential issues with Goodrow: he played on a fantastic line with amazing linemates in Tampa and his contract could become a problem down the line.

Barclay Goodrow, UFA rights traded to NYR, is a low-event bottom six forward who was kind of a "more than the sum of its parts" glue guy on a really good line. #NYR pic.twitter.com/ZOGREnVzNo

Almost $22 million and six years for a 28-year-old who will likely spend the majority of his Rangers tenure in the bottom-six is a lot. And will he even be able to have the same success he achieved in Tampa?

Barclay Goodrow (traded to the rangers for a 7th) is a decent defensive forward who should not be relied upon to personally put the puck in the net. pic.twitter.com/F0oh8iDhhF

Even so, forward depth was a problem for New York, especially in terms of defensive-minded and physical bottom-six forwards. Goodrow’s presence has the potential to be transformational.

The Rangers clearly made adding depth defensive forwards a priority this offseason. They signed LW Dryden Hunt to a two-year deal this summer.

Hunt played 26 games in 2021 with the Arizona Coyotes and didn’t do much offensively, but was very effective in his own zone in limited minutes. 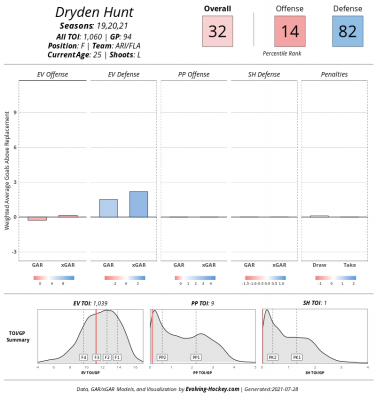 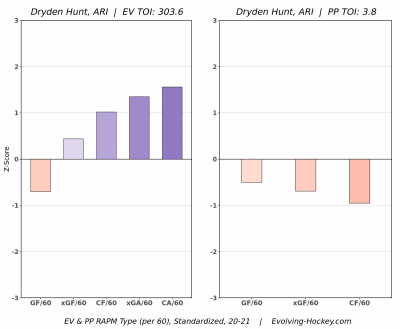 Hunt might not be a regular feature in the Rangers’ lineup this season, but he will have the chance to compete for a spot on the fourth line and, evidently, has the potential to win one.

He also might see some time on the penalty kill because of his excellent defensive ability. This was a silently solid signing for the Rangers.

He’s back. After a one-year hiatus, F Greg McKegg has returned to the Rangers on a one-year, two-way deal.

The 29-year-old center played 53 games with the Rangers two seasons ago, but will surely have a much more limited role this time around and, given the Rangers’ much-improved depth in their bottom-six, will likely spend most of the season in Hartford.

Probably the Rangers’ second-best acquisition of the offseason, LHD Patrik Nemeth will help round out a much-improved defensive group.

Many speculated that the Rangers would prioritize acquiring a veteran LHD and that’s exactly what they did.

The 29-year-old Swede doesn’t do much scoring, but has been one of the best defensive-defensemen in hockey over the past few seasons, and he’s done it on both good and bad teams.

Patrik Nemeth, signed 3x$2.5M by NYR, didn't have a very good playoff round against Vegas but otherwise has been a very effective defensive defenceman who has played both top and bottom pair roles in the past few seasons. #NYR pic.twitter.com/JH6pNgB7FX 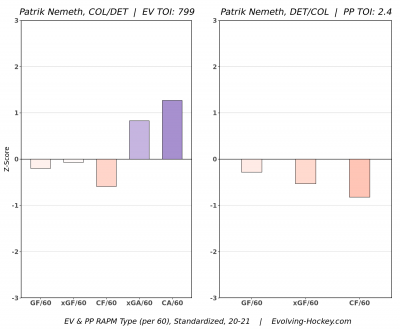 The New York Rangers expected to sign Patrik Nemeth who will be an UFA on Wednesday per @nypostsports. Nemeth has been one of the best defensive defensemen in the last ~3 seasons. It should be really good add for the Rangers. pic.twitter.com/TkpwiB1a8f

Nemeth will open the season as the Rangers’ third LHD, likely playing alongside the rookie and his fellow countryman, Nils Lundkvist.

This was a solid move for the Rangers. Nemeth will serve as a great mentor to the promising Lundkvist while helping the Rangers’ defense potentially become one of the best in hockey.

Conversations about toughness, the New York Islanders, and Tom Wilson made the Rangers emphasize the addition of physical, gritty players this offseason.

RW Ryan Reaves has said that he can be the solution to the “Tom Wilson problem” and it seems like the Rangers were interested.

The Rangers acquired Reaves from the Golden Knights in exchange for a 2022 third-round pick and then immediately signed him to a one-year extension. The 34-year-old Reaves is strictly here for his size, toughness, and eagerness to fight.

At his age, he doesn’t really bring much of anything else to the table. He no longer scores and is unremarkable defensively. We know that Gallant likes Reaves and clearly values the way he plays and what he brings to the teams he plays for.

The New York Rangers have acquired Ryan Reaves from the Vegas Golden Knights in the exchange for 3rd round draft pick 2022. Reaves is just big size, strong, old type hockey player and that's all. He's there just for fight(s) against Tom Wilson. pic.twitter.com/jPoQo4dlBR

Ryan Reaves (traded to the Rangers for a third) is a player you can employ to work at your hockey team. pic.twitter.com/Q7dATLJ6Ld

Reaves is known for being a great locker room presence and can eventually become important to this young Rangers team.

Last but not least is LHD Jarred Tinordi. Tinordi is just another depth signing whom the Rangers value for his toughness and physicality.

Tinordi, who doesn’t score and isn’t good in his own zone, is huge and uses his 6’6″ frame to play a physical game. He’s another player the Rangers signed who won’t see much time on the ice and is much more of an emergency depth piece.

The biggest loss of the Rangers this offseason, by far, was RW Pavel Buchnevich. New York sent the 26-year-old to the St. Louis Blues in exchange for forward Sammy Blais and a 2022 second-round pick.

It was becoming obvious that Buchnevich’s contract situation was a precarious one, but this trade was suspect. Buchnevich took a while to get going, but had his breakout season in 2021.

He scored 20 goals and 48 points in 54 games and was the team’s best two-way forward. He was incredibly important to the Ranges at even-strength and on special teams.

Buchnevich leaves behind a glaring hole and, to make matters worse, the Rangers didn’t even get a great return for him.

They were unable to receive a first-round pick from St. Louis and the player they got, Blais, has had a poor career so far and can be considered unproven, at best.

Will Drury and the Rangers come to regret this move?

F Colin Blackwell was the Ranger taken by the Seattle Kraken in the expansion draft. Blackwell wasn’t expected to have as significant role on the Rangers as he ended up playing.

Originally regarded as a solid depth signing, Blackwell played big minutes for the Rangers up and down the lineup, including as a top-six forward and on the power play. He scored 12 goals and 22 points in 47 games and was one of the team’s leading scorers.

Blackwell’s role will be filled by one of the Rangers’ promising youngsters and the question will be if they can put up similar numbers to his.

He scored one goal and eight points in 31 games last season, but continued to be a fantastic defensive forward.

He brought many positives to the team, but the good news is that Di Giuseppe was used less and less towards the end of the season and had become expendable. The Rangers have better bottom-six options heading into the 2021-22 season.

Many Rangers fans were relieved to see their team finally cut ties with C Brett Howden.

Howden came to New York as a prospect as part of the package deal they received from the Tampa Bay Lightning in exchange for LHD and captain Ryan McDonagh and F J.T. Miller.

Expectations were sky-high for the former first-round pick, but he never even came close to meeting them. Howden was a workhorse throughout his entire Rangers tenure, but that’s about it.

He was awful at everything, but the coaching staff appreciated how hard he worked and that allowed him to be a consistent presence in the Rangers’ lineup.

In July, the Rangers sent Howden to the Vegas Golden Knights in exchange for Nick DeSimone (whom the Rangers did not sign) and a 2022 fourth-round pick, a decent return for the young center.

As the Rangers seek to begin their playoff push, there is simply no place for Howden in the lineup and he will be replaced by much better players.

Finally, the Rangers bid veteran LHD Brendan Smith farewell this offseason. Smith was never a star player for the Rangers, but was a good veteran who provided valuable depth to a young Rangers team.

Smith brought some toughness and grit to a Rangers team last season that lacked those qualities while tying his career-high in goals with five.

The Rangers did upgrade at the position, but that’s not to say his presence won’t be missed, especially in the locker room.