The Devils lock up the RFA for two more years after promising rookie season.

One of the New Jersey Devils’ top youngsters has been locked up. On Thursday morning, the Devils re-signed RFA forward Yegor Sharangovich to a two-year deal with an AAV of $2 million.

No “bye bye” today. #NEWS: We have re-signed Yegor Sharangovich to a two-year contract.

Sharangovich is heading into his sophomore season and the Devils felt that the 23-year-old earned this deal after a solid rookie season.

Sharangovich scored 16 goals and 30 points in 54 games in his inaugural season. He was one of the team’s best bottom-six forwards and could have a prominent role on the Devils team of the future.

Sharangovich is a poor defender and will likely work on that aspect of his game, but his offense, especially his shooting, was particularly impressive. 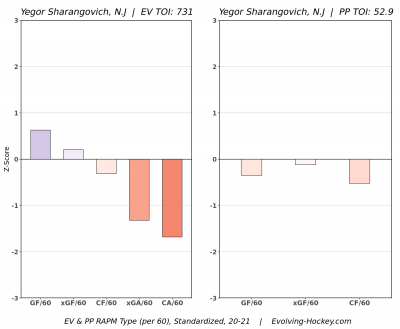 He was an elite finisher and very efficient scorer. Sharangovich also exhibited great discipline and was able to stay out of the box in his rookie campaign.

Yegor Sharangovich, signed 2x$2M by NJ, is an offence-first middle six winger who scored at a very good rate (albeit quite possibly on unsustainable shooting) as a rookie. #NJDevils pic.twitter.com/4MRdSVCtN0

The Devils clearly liked what they saw from their youngster, who has a bright future. The question now becomes: will he pick up where left off or deal with a sophomore slump?