The Rangers lock down an important youngster to a team-friendly deal.

On Thursday afternoon, the New York Rangers signed C Filip Chytil to a two-year deal carrying an AAV of $2.3 million.

The Chyt's back on. 🔥#NYR and RFA Filip Chytil have agreed to terms on a two-year contract. pic.twitter.com/uZtBxOsynD

Chytil, who spent most of the 2020-21 season on the Rangers’ “diaper line” as the team’s 3C, is one of the team’s most important youngsters.

He hasn’t done great as a center especially in the faceoff circle and the Rangers are considering moving him to the wing. Even so, he’s very fast and has excellent puck-handling skills. 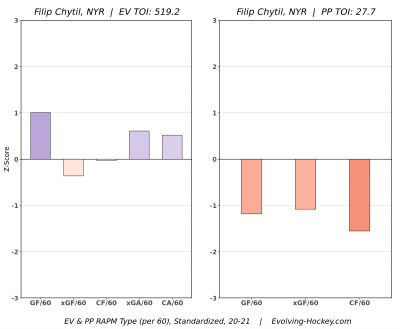 Chytil recorded 22 points in 42 games last season and recorded a career-high 14 assists. Regardless of what position Chytil ends up playing, his potential is incredibly high.

The New York Rangers announced they have re-signed Filip Chytil to two-year deal with $2.3M per year. It's great deal for the Rangers in our eyes. Chytil had really good last season and he has a potential to be legit 2C in the next season. We'll see how he develops. pic.twitter.com/y1iQD1YZCh

Chytil, who is entering his age-22 season, will become an UFA in 2025. This is the epitome of a team-friendly deal and leaves the Rangers with room to make more signings.

This has been one of the Rangers’ best moves this offseason and the hope is that this is the year Chytil breaks out.