Rangers make another pick emphasizing their focus on toughness and grit.

It appears that the New York Rangers are taking the toughness and grit thing very seriously.

On Thursday night, the team announced that it had acquired RW Ryan Reaves from the Las Vegas Golden Knights in exchange for a third-round pick in the 2022 NHL draft.

They then signed him to a one-year extension worth $1.75 million on Saturday afternoon.

OFFICIAL: #NYR have agreed to terms with Ryan Reaves on a one-year contract extension.

Reaves doesn’t bring much to the table, at least not anymore, at either end of the ice and will likely spend most of his time on the fourth line. The 34-year-old scored just one goal and five points in 37 games last season. 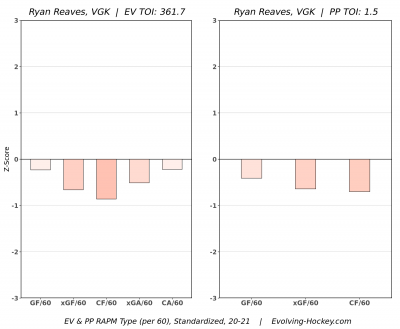 It’s difficult to say that this move comes as a surprise. After the Rangers had some issues with the Washington Capitals’ Tom Wilson, talks of issues regarding toughness and grit began and really haven’t stopped since.

The Rangers have already made multiple moves to address such issues and this trade is just another. Reaves isn’t exactly good, but he’s known for being one of the grittiest and most physical players in hockey.

Like Wilson, he can sometimes take things too far. He was suspended for two games during these past playoffs after hitting then-Colorado Avalanche defenseman Ryan Graves.

Reaves won’t be relied on for his skills and will be one of the more significant physical presences on the Rangers. It isn’t great that the Rangers gave up a third round pick for him.

In the Rangers' continued quest for toughness, they acquired Ryan Reaves for a third round pick. At this point in his career, the winger projects to remain in replacement level territory (via @domluszczyszyn) #NYR pic.twitter.com/ogVqdrBck3

However, he did play his best hockey under Gerard Gallant, which should give fans at least some reason for hope.

He put up career-highs under Gallant and the new head coach of the Rangers surely appreciated that and wanted to bring Reaves over, especially since he caters to his style.