Miller becomes the fourth Rangers defenseman to be named to the All-Rookie Team.

The 2021 NHL Awards announcements on Tuesday evening were great for the New York Rangers.

Adam Fox was awarded his first career Norris Trophy and defenseman K’Andre Miller was named to the NHL All-Rookie Team.

Alex Nedeljkovic of the @Canes
K’Andre Miller of the @NYRangers
Ty Smith of the @NJDevils
Kirill Kaprizov of the @mnwild
Josh Norris of the @Senators
Jason Robertson of the @DallasStars#NHLAwards #NHLStats: https://t.co/5Nc2BQfKHh pic.twitter.com/V4agjgIkaO

Miller is the fourth Rangers defenseman to be named to the All-Rookie Team and the first since Brady Skjei in 2016-17.

Miller showed maturity, composure, and confidence beyond his years and usually didn’t look like a rookie out on the ice. He was surprisingly good offensively as well. 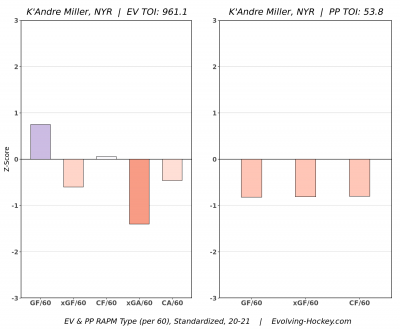 Playing alongside such a seasoned veteran as Jacob Trouba, who ended up being one of the team’s most important players, was instrumental to Miller’s growth and development.

Miller is viewed as a key part of the Rangers’ defense of the future. He will look to build on his strengths and continue to grow and improve after such an impressive start to his career.