Smith becomes the sixth defenseman in Devils history to be named to the All-Rookie Team.

Alex Nedeljkovic of the @Canes
K’Andre Miller of the @NYRangers
Ty Smith of the @NJDevils
Kirill Kaprizov of the @mnwild
Josh Norris of the @Senators
Jason Robertson of the @DallasStars#NHLAwards #NHLStats: https://t.co/5Nc2BQfKHh pic.twitter.com/V4agjgIkaO

Smith had his ups and downs and regressed as the season went on, but the rookie was a bright spot on an incredibly disappointing Devils team. 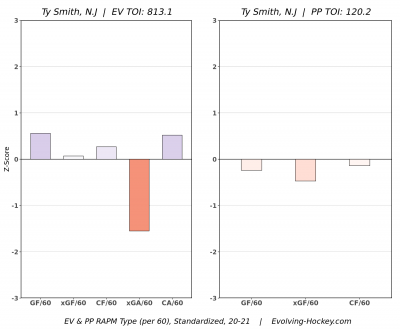 Smith was especially impressive offensively and did well considering the fact that he was playing on one of the worst defensive teams in the league. The Devils have promising young talent, and Smith is definitely a part of that conversation.

Smith is the first Devil and first Devils defenseman to be named to the All-Rookie Team since Will Butcher in 2017-18.

The 21-year-old recorded an impressive 23 points in 48 games with the Devils in his rookie campaign and will look to build on these numbers while improving his defensive game next season.