Bettors are throwing down a significant amount of money on Mets ace Jacob deGrom winning the National League MVP.

Despite the laundry list of an IL the Mets are currently dealing with, ace right-hander Jacob deGrom remains a star.

The two-time Cy Young Award-winner doesn’t show any signs of slowing down whenever he takes the mound, and because of that, DraftKings Sportsbook bettors are throwing a notable sum of cash on him to win the league MVP. 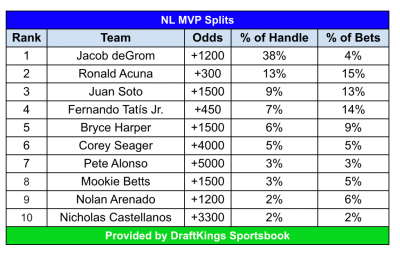 deGrom (+1200 to win the prestigious award) is responsible for 38% of the total handle, which leads the National League by a wide margin. As shown above, Braves outfielder Ronald Acuna sits in second with just 13% of the money.

However, deGrom isn’t getting much love when it comes to the percentage of wagers placed, sitting with just 4% of the bets (eighth in the National League).

This comes after deGrom recorded a 0.80 ERA and 0.600 WHIP through his first seven starts (45.0 innings pitched). He additionally has struck out 74 batters and walked just seven.

His success hasn’t halted there though — Jacob is currently batting .471 through 17 at-bats with eight total hits and a pair of RBIs.

Another fellow Metropolitan who finds himself on the above list is first baseman Pete Alonso (+5000, 3% of both the handle and number of bets).

It may be a bit surprising to see some bettors still wagering on Alonso to the point where he even finds himself on the list, but what isn’t surprising is the current lack of money and wagers on Mets shortstop Francisco Lindor.

While many may have believed he could’ve been a contender for the National League MVP when his inaugural season in Queens began, the 27-year-old has heavily disappointed up to this point.

Lindor is currently hitting just .185 through 157 at-bats in 43 games, succumbing to boos following a number of his at-bats at Citi Field. At the moment, the Mets aren’t getting their money’s worth with Francisco, and neither are the bettors who originally banked on him to undergo a tremendous season.

Place your bets for the National League MVP at DraftKings Sportsbook by clicking here.