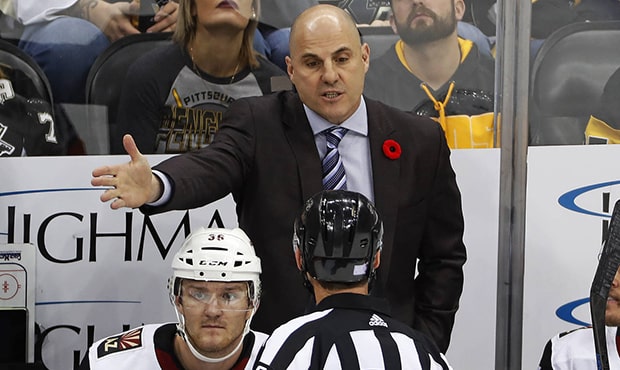 The Rangers reportedly have interest in the former Coyotes head coach.

As the New York Rangers‘ new President and GM Chris Drury looks to make the right hire for the club’s new head coach, the interview list is starting to take shape.

According to insider Elliotte Friedman, one of those who will speak with the Rangers will be former Arizona Coyotes coach Rick Tocchet.

Arizona parted ways with Tocchet on May 8 after being eliminated from the playoffs for the seventh time in eight years. Tocchet had been the head coach in Arizona for four years.

Tocchet will also be interviewed by NYR https://t.co/7mkdUvp5IX

The Coyotes finished the 2021 season with a 24-26-6 record that, unfortunately, included a streak of 12 losses in 15 games that cost the team its playoff chances and, ultimately, Tocchet his job.

Tocchet played 18 NHL seasons, including a Stanley Cup championship with Pittsburgh in 1992. Behind the bench, he spent two seasons as Tampa Bay’s head coach and won two Stanley Cups as an assistant at Pittsburgh before being hired by Arizona in 2017.