The Rangers’ top LHD has signed a three-year, $9 million extension.

The New York Rangers made their first signing of the offseason.  On Monday, they agreed to terms with LHD Ryan Lindgren on a three-year, $9 million deal.

Lindgren was one of several Rangers players set to become a restricted free agent at the conclusion of the 2021 NHL season, and many across the league were wondering what the Rangers had planned for him.

Lindgren was originally selected by the Boston Bruins in the second round of the 2016 NHL Draft. He was traded to the Rangers in 2018 as part of a package deal in exchange for forward Rick Nash.

Lindgren made his NHL debut in Jan. 2019, but appeared in just five games with the Rangers that season and didn’t become a mainstay in their blueline group until the 2019-20 season.

People weren’t sure what to expect from Lindgren on the Rangers, but he’s become one of the most important players on this team. He looked decent in 2020, but took a massive step forward in 2021. 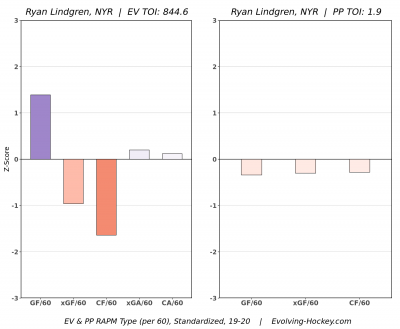 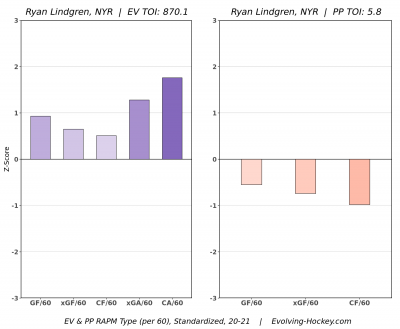 Lindgren was fantastic up and down the ice this season and quickly became one half of one of the best defensive pairings in the NHL.

He’s currently the Rangers’ top left-handed defenseman as well as their second-best blueliner behind his linemate, Adam Fox. Lindgren is a fantastic defensive-defenseman, but even showed out offensively this season. 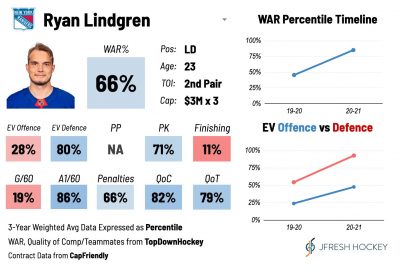 Lindgren, who will turn 24 years old next Feb., is still relatively young and can continue to develop and exhibit his importance to this team. 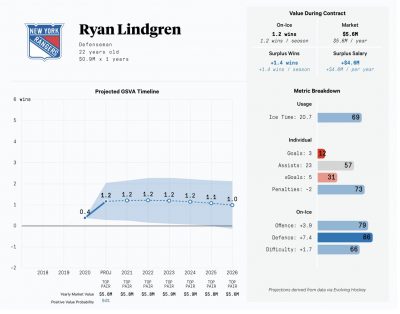 As the Rangers’ season came to a close, questions about grittiness and toughness began to arise.

Lindgren, who reminds Rangers’ fans of tough guy Dan Girardi, has garnered a reputation for being gritty and taking more than his fair share of hits.

He’s the team’s grittiest player and isn’t one to back down from a challenge or fight. He’s a very skilled hockey player, but is valuable for the combination of tangible and intangible assets and characteristics that he brings to the table.

Watching John Davidson and Jeff Gorton leave came as a surprise, but Drury has done well in the organization and has promising qualities.

The Lindgren contract is a bargain and, so far, Drury hasn’t missed. At this rate, fans have much to be excited about.