UConn is one of the hottest teams in the country and they are the favorite to win the 2021 Big East Tournament.

The Big East Tournament is back. Last year’s tournament was canceled at halftime of the St. John’s-Creighton quarterfinal game due to the outbreak of COVID-19.

Although there were a few speed bumps on the road to this point in the 2020-21 college basketball season, March Madness is officially here. For New York City, that means all eyes will be on the Big East Tournament.

The local schools — Seton Hall and St. John’s — need to put up a good showing for a chance at an at-large bid to the NCAA Tournament. Unfortunately, the Pirates and the Johnnies will play each other in the quarterfinals on Wednesday.

Let’s preview the 2021 Big East Tournament with the bracket, schedule, odds, predictions, and a team-by-team breakdown of the field. 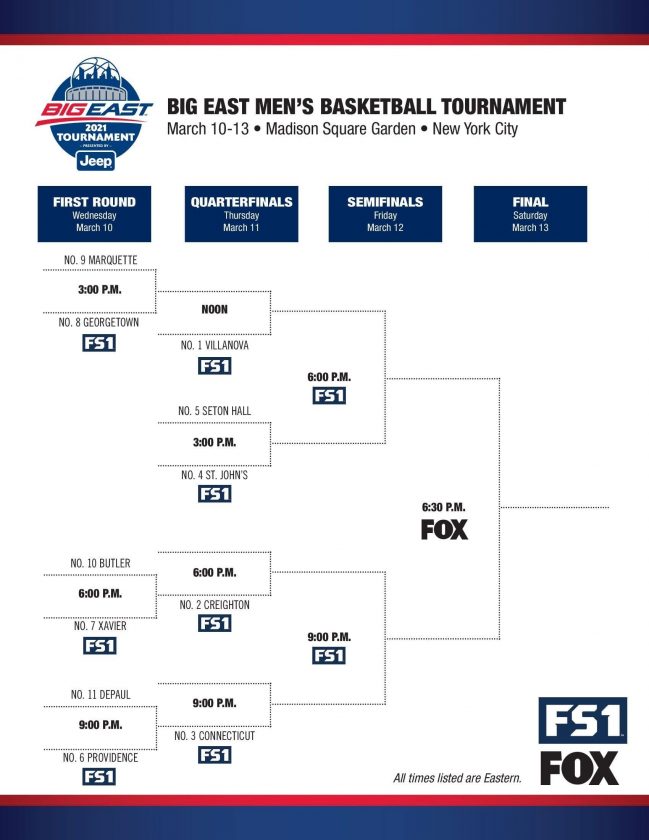 The above odds are courtesy of DraftKings Sportsbook. Seton Hall odds are not listed on any online sportsbooks in New Jersey.

Butler has a tough draw in the first round against Xavier. The Muskateers swept their season series against the Bulldogs and they should like their chances going into Wednesday’s game. Butler freshman Chuck Harris enters the Big East Tournament off of one of his best games of the season. Harris poured in a career-high 29 points in a loss to Creighton over the weekend. He has scored in double figures in six consecutive games.

Marquette did not put together its best season by any stretch, but they have to be looking at the Big East Tournament with wide eyes. If you squint hard enough, you can envision a path to a championship for almost anybody in the field. Marquette has a winnable game against Georgetown. The winner will play a shorthanded Villanova squad that is already a lock to make the NCAA Tournament. Then, in a possible semifinals matchup, they would face the winner of St. John’s and Seton Hall, two wildly inconsistent squads.

New Yorkers would love to see Patrick Ewing turn Georgetown into a consistent winner again, but it has yet to happen in his four years at the helm. Although it won’t be easy for Georgetown to make a deep run in the Big East Tournament, they are trending in the right direction. They won four of their last six games to finish out the year. If the Hoyas beat Marquette in the first round, they might have enough momentum to give Villanova some problems.

Xavier is a tricky group to nail down this year. They began the season with a perfect 7-0 record in non-conference games, but struggled when Big East play began. The Muskateers didn’t handle the stop and start nature of the 2021 season, finishing under .500 in the Big East. New Jersey native Zach Freemantle and Paul Scruggs make this team go. Freemantle and Scruggs are two of the three Muskateers averaging double figures this year.

Providence has one of the best scoring duos in the Big East in Nate Watson and David Duke. The inside-out pairing is combining to score 34 points per game. Providence has a tough road with UConn lining up in the quarterfinals, but it would be unwise to count out the Friars completely.

It’s worth noting that Providence beat UConn in February and they also have wins over Seton Hall, Creighton, and Villanova. Providence advanced to the finals of the Big East Tournament as recently as 2018.

Seton Hall needs to win at least two games to punch its ticket to the Big Dance. It just so happens that the bracket might be opening up for the Pirates. They are facing their local rival St. John’s in the quarterfinals after splitting the season series with the Johnnies. The winner of that game will likely face a shorthanded Villanova squad in the semifinals.

The Hall needs Sandro Mamukelashvili to perform if they are going to make a run in MSG. St. John’s is light in the frontcourt, meaning Mamu should be able to impose his will.

St. John’s was winning at halftime against Creighton when the Big East Tournament was canceled last year. We’ll never know if they were destined to pull off the upset en route to a surprise run, but they will get another crack at it in 2021.

UConn is looking to win the Big East Tournament in their first year since re-joining the league. Oddsmakers seem to think the Huskies are the favorite going into Madison Square Garden. Sophomore guard James Bouknight is going to be playing in the NBA next year, but he still has time to make his mark on college hoops. He’s putting up 20.2 points per game, which is tops in the conference.

Danny Hurley wanted to help UConn return to its former glory and they look like they are on the right track. A win in the Big East Tournament could help propel the Huskies on a deep run in the NCAA Tournament. Where have we seen that before?

Creighton fell just short of a Big East regular-season title and in theory, they should be in a good spot to win their first Big East Tournament title. However, the Bluejays are in a strange spot with head coach Greg McDermott. The longtime Creighton head coach was recently suspended for making racially insensitive comments to his team. He’s since been reinstated, but it’s impossible to know what to expect from the Bluejays in New York this week.

When it comes to the on-court play, Creighton is led by Marcus Zegarowski. The junior guard averaged 15.4 points, 3.7 rebounds, and 4.4 assists per game en route to an All-Big East first-team selection.

Villanova is the top seed, but they aren’t the favorite to win it all after Collin Gillespie’s recent season-ending injury. The point guard and All-Big East first-teamer was the engine for Villanova’s offense and they are going to miss him dearly in March Madness.

Nevertheless, it would be unwise to sleep on the Wildcats. This isn’t Jay Wright’s first rodeo and he still has more than enough talent to run the table in the Big East Tournament. Look for Nova to play through Jeremiah Robinson-Earl even more in the wake of Gillespie’s injury. Robinson-Earl is averaging 15.2 points and 8.4 rebounds per game this season.