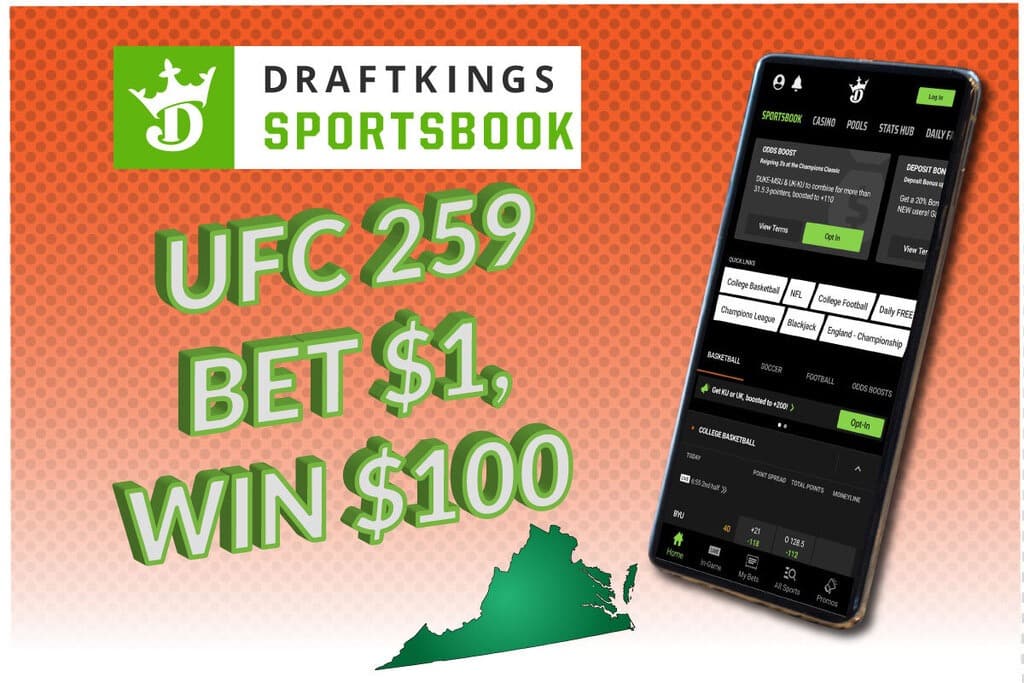 DraftKings Virginia Sportsbook is the place to go for your UFC 259 betting needs. New users who sign up can grab a no-brainer offer and win big on their first bet.

New users on DraftKings Virginia Sportsbook can sign up and grab 100-1 odds on a single punch to be landed in any of the three championship bouts scheduled for UFC 259.

Simply put, something insane would need to happen for no punches to land in any of these fights. Even so, new users only have to risk $1 on this promotion. It’s a low-risk, high-reward offer that won’t be around forever.

There are three belts on the line at UFC 259. Israel Adesanya is trying to take the light heavyweight belt from Jan Blachowicz. Amanda Nunes is the heavy favorite to retain her title against Megan Anderson and Petr Yan will try to defend his belt from Aljamain Sterling. No matter which fight you pick, all you need is for one fighter to land a punch to win $100 with DraftKings Virginia.

Sign up with DraftKings Virginia by clicking here and grab 100-1 odds on any fighter to land a punch at UFC 259.

The first step to grabbing this ridiculous promo is creating an account on DraftKings Virginia. Once you input some basic information to register, you will also need to deposit at least $5 into your account to qualify for this UFC 259 odds boost.

After funding your account, bet $1 on the moneyline for any fighter in the three championship bouts. You will automatically qualify for $100 in bonuses if there is a punch landed in your fight. The bonus will be issued in four separate $25 free bets that will be valid for one week.

This offer is available to new users in Virginia and a handful of other states (Colorado, Iowa, Illinois, Indiana, Michigan, New Jersey, Pennsylvania, Tennessee, and West Virginia). You must be 21 years of age or older to play on DraftKings Sportsbook.

Here are the current odds on all three UFC 259 championship bouts at DraftKings Virginia:

All three fights could turn out to be classics. Israel Adesanya is trying to become just the fifth fighter in UFC history to hold two belts at the same time. He’s the favorite against the current Light Heavyweight champion Jan Blachowicz.

Speaking of champ champs, Amanda Nunes is one of the four fighters to ever accomplish what Adesanya is trying to do. Nunes has been dominating the Women’s Featherweight and Bantamweight divisions for the last four years. It’s not surprising to see her come into UFC 259 as the heavy favorite.

And the first of the three bouts on Saturday, Petr Yan vs. Aljamain Sterling, could wind up being the most exciting fight of the night. This is a complete toss-up and could go either way. No matter who you decide to bet on though, there is an easy way to score $100 with DraftKings Virginia.

Sign up with DraftKings Virginia by clicking here and grab 100-1 odds on any fighter to land a punch at UFC 259.