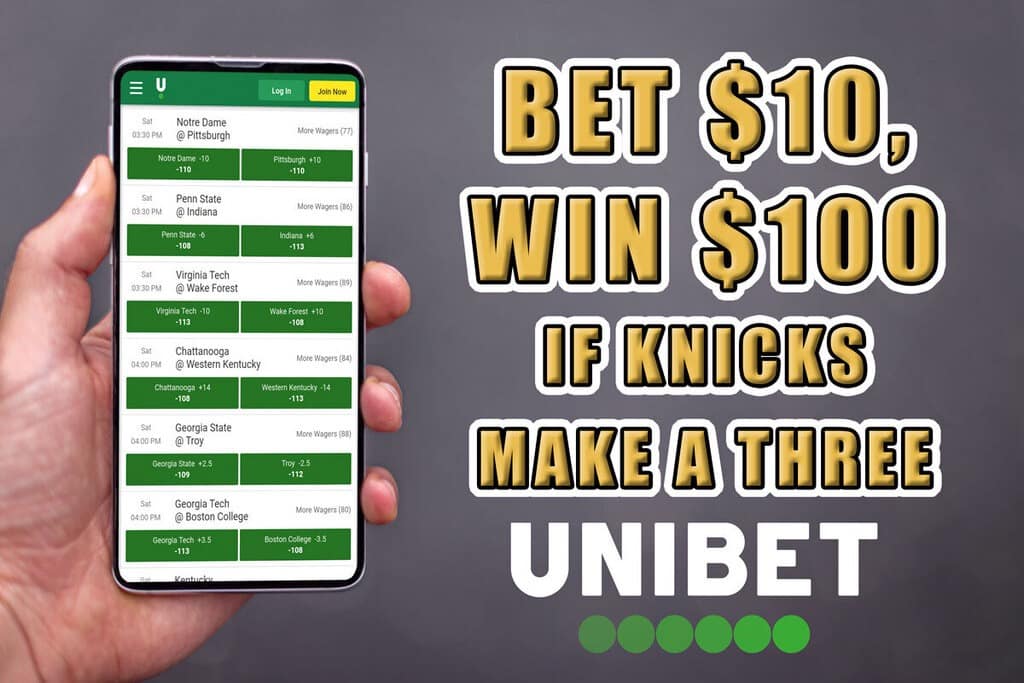 New users who sign up with Unibet can score big on the Knicks-Pacers game on Saturday night. They are giving away ridiculous 10-1 odds on the Knicks or Pacers to hit a single three-pointer.

New users who register at Unibet Sportsbook and bet at least $10 on the Knicks or Pacers  will win $100 when their team hits a three. This is a no-brainer promo offer for new players, one designed to cash in an easy win and get the wagering experienced started with a big win.

These are incredible odds to grab and this is as close to a lock as you will find when it comes to NBA betting. Despite the fact that the Knicks rank second-to-last in the NBA in made threes and attempted threes, they hit just under 10 threes per game. Meanwhile, the Pacers are 20th in the NBA at 12.3 threes per game.

In other words, it’s highly, highly unlikely that either team would go an entire game without a single make. That means new users who sign up with Unibet and make a moneyline bet are extremely likely to cash a $100 bonus and do so quickly.

Sign up with Unibet in NJ by clicking here and use the bonus code UNIKNICKS to get 10-1 odds on the Knicks to hit a three-pointer. Get the Pacers to make a three in Indiana right here with promo code UNIPACERS.

Let’s take a deeper look at this lucrative offer from Unibet. All it takes is a $10 moneyline bet to qualify for 10-1 odds on the Knicks to hit a three-pointer. And the best part is that it doesn’t matter who wins the game. If New York hits a three, but loses to Indiana, users will still win the $100 bonus.

In today’s NBA, the three-point shot is king. Every team emphasizes shots at the rim and beyond the arc. It’s growing increasingly rare (it’s almost impossible) to see teams go 48 minutes without connecting on a shot from deep.

As mentioned earlier, New York goes against the grain to a certain extent. Although they don’t jack up threes at the same rate as the rest of the NBA, they still take their fair share in each game. The Knicks have played the Pacers twice already this season, hitting 12 threes in each game. That bodes well for NJ bettors who grab this sign-up bonus from Unibet.

Meanwhile, the Pacers are more of a middle of the road team in terms of making threes, but they still average more than a dozen per game.

Getting Started With Unibet

This bonus from Unibet is only available to new users until tip-off of Saturday’s game between the Knicks and Pacers. Let’s walk through the exact steps necessary to get in on this insane offer:

There isn’t an easier way to win money on the Knicks.

After splitting the first two games, this meeting can serve as a rubber match between the teams. Anything can happen on the court, but we are willing to bet that these teams will each manage to hit a single three-pointer.

Sign up with Unibet in NJ by clicking here and use the bonus code UNIKNICKS to get 10-1 odds on the Knicks to hit a three-pointer. Get the offer in Indiana with UNIPACERS right here.