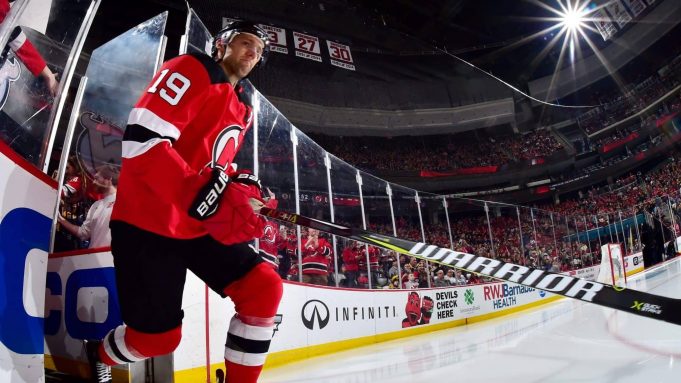 As if this accomplishment wasn’t special enough, the 35-year-old has played all 1,000 of his games as a member of the Devils organization.

Zajac is now the 25th active NHL player to get to 1,000 games, accomplishing the feat just one day after the great Sidney Crosby skated in his 1,000th career game.

Zajac took a solo lap before the game began, which he revealed was a surprise to him and made him feel like a rookie again. The Devils’ training staff made t-shirts to commemorate the occasion.

Zajac was taken in the first round of the 2004 draft and has spent his entire 15-year career in New Jersey. He joins Alexander Ovechkin, whom he faced on his special day, as just the second member of that draft class to get to 1,000 games.

Zajac has accomplished a great deal as a member of the Devils, including this remarkable achievement, but he’s still chasing even more in Devils history.

He’s five goals away from tying Bobby Holík for third-most goals scored in franchise history. He’s just one assist away from fifth all-time.

An alternate captain, Zajac has been a staple on the Devils this millennium, and fans will always appreciate what he has done for this team. His love for his team is clear and he really does leave it all on the ice every time he steps foot in the rink.

"This organization has meant so much to me and I’ve loved playing here and I want to leave it all out there for this team and they’ve given me my first chance and it was just all around a special day.” https://t.co/lOHGBBzhsL

Can the Devils give their beloved veteran one or two more Cup runs before he hangs ‘em up?