The Rangers’ goalies have had a tough start to the season.

The New York Rangers‘ goaltending situation has not enjoyed a smooth start to the new year.

Coming into the season, the tandem of Alexandar Georgiev and Igor Shesterkin was expected to be one of the best goalie duos in hockey, but that hasn’t been the case.

Georgiev looked great in his first start, shutting out the New York Islanders in an admirable performance. Shesterkin looked rough in his first few games, and head coach David Quinn opted to roll with a goaltending rotation.

However, Shesterkin’s most recent starts have been much better, and Quinn announced that he would no longer be going with a rotation. He’d start whichever goalie was playing best, and that favors Shesterkin. 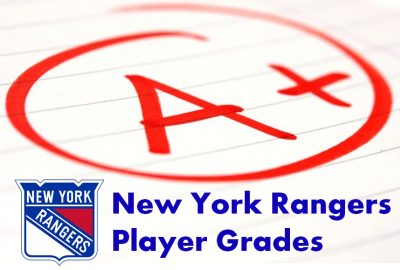 Georgiev has been inconsistent and continues to prove that he shouldn’t be anything more than a backup. His numbers through five games have been pretty underwhelming: .914 SV%, 2.46 GAA, and -0.22 GSAA.

Georgiev’s most recent start (his first since his altercation with DeAngelo) came on Wednesday against the Boston Bruins, and this was another tough outing for him.

It’s hard to say all three goals were his fault, but he could’ve done more on each one.

Georgiev is a solid backup, but he shouldn’t see too much playing time as the season goes on. That would be in the team’s best interest.

Before the season began, Shesterkin was the Calder Trophy favorite. He had a fantastic introduction to the league last year, and the expectation was that he’d carry his excellent play into 2021. That wasn’t the case, early on.

Shesterkin struggled mightily, so much so that the goaltending situation became a rotation. However, Shesterkin has looked much better in his last few starts and should become the Rangers’ number one option in net, as was expected of him.