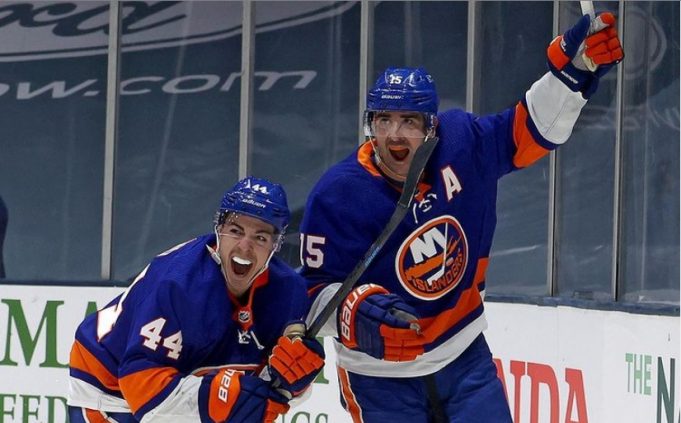 Were the Isles able to snap their five-game losing streak after almost a week off?

The New York Islanders saw several of their games postponed due to COVID-19 issues, but this was a much-needed break for a team that had been on one of the worst losing streaks in the NHL.

Head coach Barry Trotz made some line changes ahead of their game against the Pittsburgh Penguins to light a fire. Were the Islanders able to get a win for Semyon Varlamov in his 500th career game?

1st period: The best in a while

The Islanders were much more dominant to start the game.

About halfway through the period, the fourth line had a great shift, and it’s hard to believe they didn’t score. They practically had a three-on-none in front of the net, but their goal-scoring struggles continued.

In fact, this line was one of the worst in the league in terms of scoring coming into this game.

Shortly after, however, the Penguins committed a turnover in the neutral zone. Brock Nelson made an incredible pass under pressure to Jordan Eberle, who was left open and scored a goal that Penguins goaltender Tristan Jarry probably should’ve had.

Eberle had been playing noticeably well up to that point.

Rookie Pierre-Olivier Joseph tied it up for the Penguins on a terrific shot that Varlamov didn’t have a chance on. The Islanders made a bad play in the neutral zone that led to the goal.

Transitions in the neutral zone have been a problem for New York since the season began.

The Islanders had a nice response in the final quarter. Mike Matheson turned the puck over and Nelson had a good check against the boards.

The members of this line took a few shots, but Eberle was able to finally get one of the rebounds and put the puck in. This line had been moving the puck well all period and was the team’s best line to start the game.

Varlamov came up with some big saves in the final minute or so.

This was one of the best periods the Islanders had played all season.

They did conceded a goal because of sloppy play, but they were dominant and were able to take advantage of turnovers. It looks like the team’s new second line might be here to stay.

2nd period: Why are you slowing down?!

Unlike the first, the Penguins were the stronger team to start the second period.

Casey Cizikas and John Marino were booked for interfering with each other on the same play, but the game was overall very clean and both teams were disciplined.

Jake Guentzel and Sidney Crosby made the Islanders’ defense look silly on the four-on-four, but Varlamov came up with an unbelievable save on “Sid the Kid”.

The defense played poorly to end the period, and that would come back to bite the Islanders. Scott Mayfield turned the puck over, which led to an Evgeni Malkin goal.

The Islanders did several things correctly this period, but they let the Penguins into the driver’s seat. Could they bounce back?

Heading into this third period, it would be safe to say that the Islanders were in good shape: no team has allowed fewer goals (three) in the third period.

Unfortunately, that wouldn’t last long. The Penguins were able to score to take the lead, but the fourth line stepped up and finally contributed in the best way possible.

A great back pass by Cizikas to Cal Clutterbuck allowed Clutterbuck to score his first of the year.

The Islanders were able to get something done on the power play, which was nice to see. Ryan Pulock and Anders Lee did what they do best. Pulock ripped one of his vintage laser shots that Lee was able to put into the net.

This was definitely one of the best games the Islanders had played all season, and they needed this win more than anything.

The fact that most of the team’s contributors had been struggling to start the year shows that they might be turning a corner and that Trotz should probably stick with the new lines for the time being.

The key moment of the game was the Islanders’ late power play that led to the game-winning goal.

It can be said that the Penguins had been playing slightly better, at that point, and they would’ve had a great chance to win in either regulation or overtime.

The power play goal allowed the Islanders to go home with a win in regulation for the first time in what seemed like forever.

Player of the game: Noah Dobson

We haven’t mentioned his name, but Noah Dobson was the best player for the Islanders. The Penguins didn’t score a single goal when Dobson was on the ice, and the same can’t be said for any other Islanders defenseman.

He had an impressive 0.82 xGF, 0.44 xGA, and 1.87 GF. He was the only player to be in the positive offensively and defensively. Dobson didn’t play much, he was on the ice for just about 12 minutes, but the Islanders scored twice when he was on.

Dobson has been one of the few bright spots in New York’s tough start to the season.