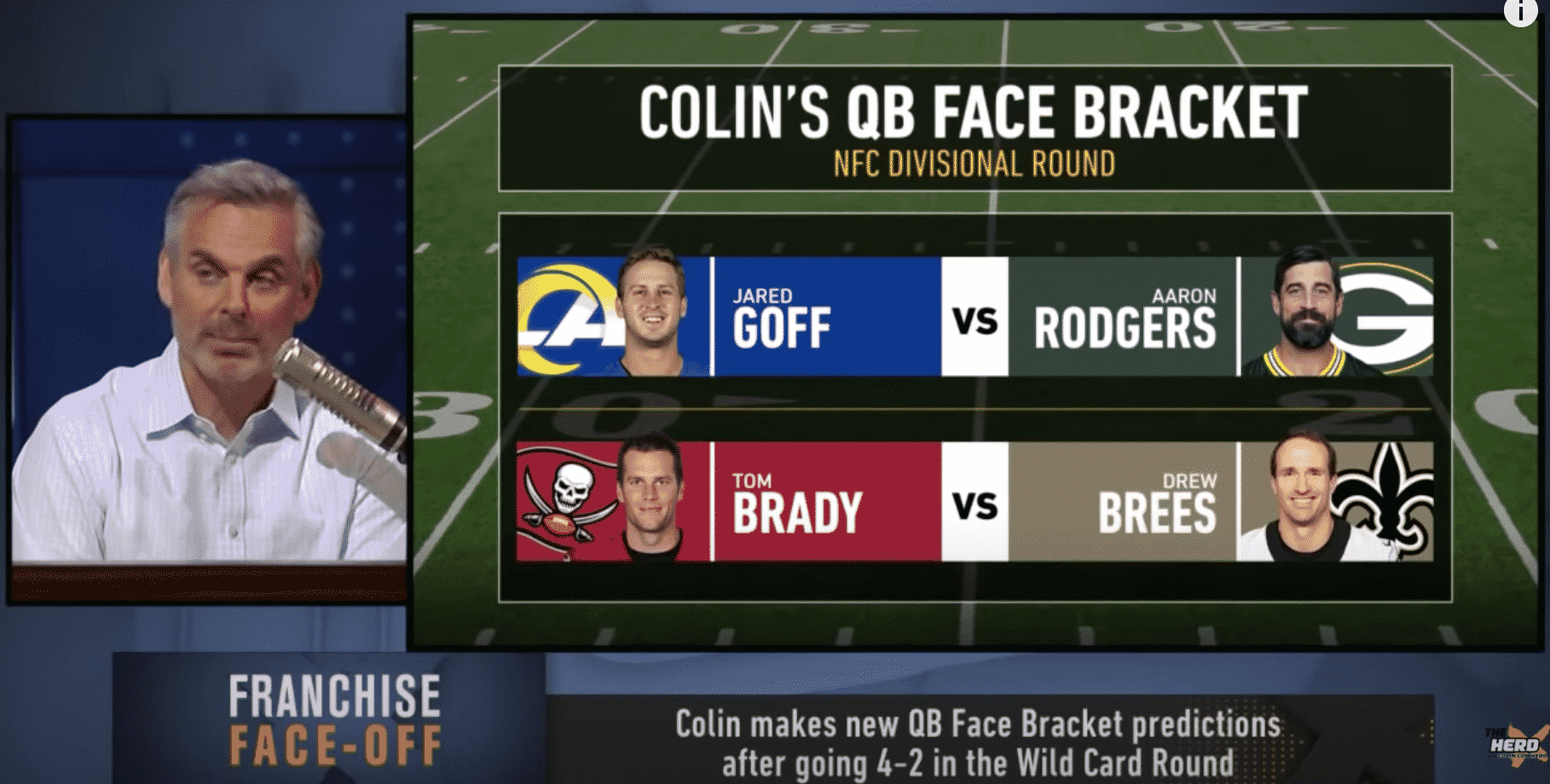 Colin Cowherd has released his “Blazing 5 Picks” ahead of an exciting slate of NFL Divisional Round Playoff games. This week’s picks come via his “Franchise Face-Off” segment ahead of the Divisional Round. These picks account for the Conference Championship games and the Super Bowl as well. Cowherd notes that his picks will not take into account coaching, homefield advantage, or defense. Rather, these picks come down to which quarterback is playing better entering the week.

Colin Cowherd has made his Blazing 5 picks and predictions for NFL Divisional Weekend action.

Get +500 odds on the Packers or Saints to score at least once this weekend in NJ right here. In PA, take advantage of this great offer here.

Colin leads off his “Franchise Face-Off” with Baker Mayfield vs. Patrick Mahomes. Mahomes is 23-1 in his last 24 starts. In his five career postseason games, he’s sported a 106.6 passer rating. The Chiefs have scored at least 30 points per game in each postseason game with Patrick Mahomes as their quarterback.

Cowherd believes Mahomes is more consistent and has a higher ceiling right now.

Click here to get 25-1 odds on any NFL Divisional Round game with FanDuel Sportsbook.

Cowherd likes Lamar Jackson, but there are concerns. The Ravens have never scored more than 20 points in any playoff game with Jackson at quarterback.

Josh Allen, meanwhile, is 7-0 since Week 12 and leads the AFC with 20 total touchdowns over that stretch.

Colin’s NFC picks begin with the Los Angeles Rams and the Green Bay Packers. Jared Goff has the fewest passing touchdowns, the lowest passer rating, and the most turnovers of any of the eight quarterbacks projected to start this weekend.

Aaron Rodgers is the superior QB.

Click here to get 100-1 odds on any NFL game this weekend with DraftKings Sportsbook.

Colin’s final pick of the week features a pair of future Hall of Famers as Tom Brady leads the Tampa Bay Buccaneers into New Orleans to take on Drew Brees and the Saints.

Tom Brady has 335 straight passes on the road without throwing an interception, an NFL record. He’s racked up 200+ yards in the first half of each of his past three games.

Drew Brees, on the other hand, has thrown 10 TDs while turning the ball over six times over his last five playoff games.

Colin’s Conference Championship picks begin in the AFC with the Buffalo Bills traveling to Kansas City for the AFC Championship game. He believes this is the toughest game to pick.

Josh Allen has thrown multiple touchdowns in six consecutive games, while Patrick Mahomes has turned the ball over seven times in his past six games.

Cowherd believes that at this moment, Josh Allen is playing at a higher, more consistent level.

Cowherd’s pick comes down to historical precedent on this one. Each of the last five times a quarterback has led the league in TD passes, completion percentage, and passer rating has made the Super Bowl. Aaron Rodgers led the NFL in each of these categories this season.

Tom Brady has had four games with multiple interceptions.

Aaron Rodgers this season became the first player in NFL history to throw for 40+ touchdowns and five or fewer interceptions. He’s been more consistent. He’ll lead Green Bay to another Super Bowl championship.

Get +500 odds on the Packers or Saints to score at least once this weekend in NJ right here. In PA, take advantage of this great offer here.