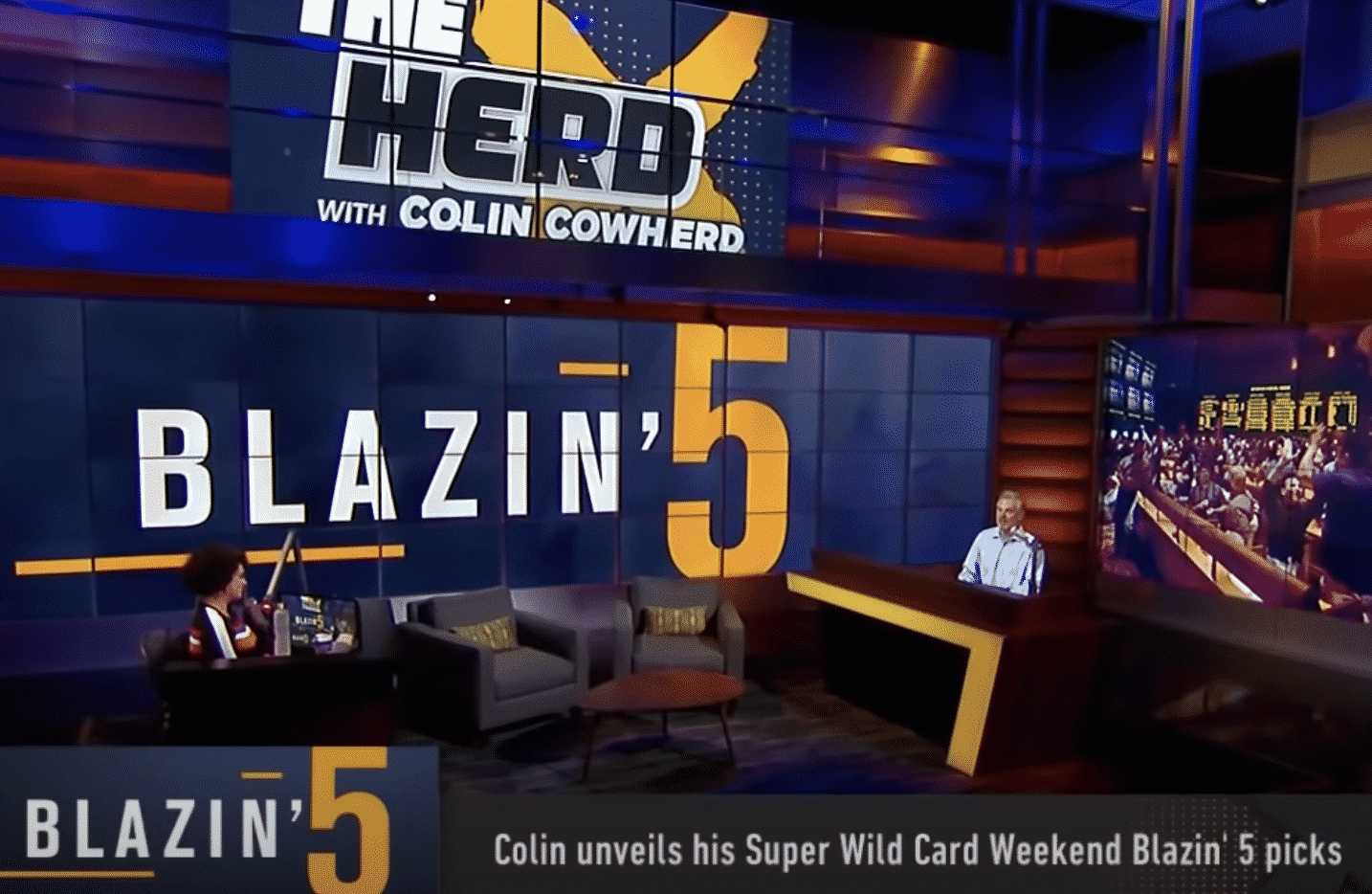 Colin Cowherd has released his “Blazing 5 Picks” ahead of a jam-packed slate of NFL Wild Card Playoff games.

Colin Cowherd has made his picks and predictions for NFL Wild Card Weekend action. These are his against the spread picks.

Get +500 odds on the Seahawks to score at least once today in NJ right here. In PA, take advantage of this great offer here.

Colin starts off his Blazin’ 5 picks with the hottest team in the league, the Buffalo Bills. They’ve won six straight games by 10+ points and are 7-1 at home this season.

Cowherd believes the Colts will be able to hang in through the first half, but he thinks that Philip Rivers’ ability to go off-script and make a big play in the second half isn’t as likely as it is for Josh Allen.

Click here to get 25-1 odds on any NFL Super Wild Card game with FanDuel Sportsbook.

This bet isn’t one that Cowherd likes, rather one he loves. Since 2019, the Seahawks have finished 25 games by one possession, which ranks as the most in the league.

Seattle’s offense has fallen apart from Week 10 on, a lot of which falls on the shoulders of early MVP candidate Russell Wilson. He’s seen his completion percentage drop from 3rd through Weeks 1-9 down to 12th in Weeks 10-17. His passing yards per game went from 1st to 24th over that same span. His passing TDs dropped from 1st to tied for 13th. His passer rating has bottomed out from 2nd through the first nine weeks to 19th over Weeks 10-17.

The Rams have had unprecedented success at sacking Wilson, compiling 11 sacks over the two matchups this season and 16 times including the final matchup from a season ago. LA is allowing the fewest yards per play in the NFL.

Colin admits he didn’t bet this one, but he thinks it’s a good play. Washington is 5-2 in their last seven games, holding opponents to 20 or fewer points in each contest.

Ron Rivera’s defense fingerprints are all over Washington’s success. Since Week 11, the Football Team has allowed just 15.9 points and 283.9 yards, which is the second-best mark over that stretch in the NFL. Their 4.4 yards per play allowed is the second-fewest in the league and they’ve forced 14 turnovers (tied-2nd) over that stretch.

Cowherd believes that now more than ever Tom Brady is a creature of habit. He’s been bad in night games and against playoff teams this season. He believes this game will be choppy and uncomfortable, with a legitimate chance at an upset, but he’s still taking the favorite.

Click here to get 100-1 odds on any NFL game this weeekend with DraftKings Sportsbook.

Colin flat-out wouldn’t touch betting on this one with a 10ft. pole, but the +9.5 point line is too big to ignore outright. He believes that the Saints have the most talented roster in the NFL, but there’s value in this line.

Chicago’s defense has been rock solid all year and since Mitchell Trubisky took over as the starting QB in Week 12, there’s been a heavier emphasis on establishing the running game. The Bears’ 144.2 rushing yards per game is the sixth-best mark in the NFL since Week 12 and their 30.2 points per game is good for seventh in the league over that stretch.

The Saints will win, but the line is hard to ignore and without fans there’s no drastic homefield advantage.

Colin’s final pick of the week includes a Week 17 rematch that saw the Browns pull out a tight 24-22 win.

Cleveland has the fewest players with postseason experience in the NFL playoffs. They’re the only playoff team with a negative point differential on the season. Perhaps most importantly, they’ll be without their head coach Kevin Stefanski, who tested positive for COVID-19.

Baker Mayfield has had a rocky-at-best experience playing at Heinz Field. In three career games in Pittsburgh, he’s 0-3 with a passer rating of just 70.6 and a 4:4 TD-INT ratio. The Browns’ offense has averaged a meager 12.7 points per game in those three matchups and has only mustered 165.0 passing yards per game.

Pass rusher Olivier Vernon is out for the Browns and Pittsburgh has allowed the fewest sacks in the NFL. On the flip side, the Steelers have gotten to the opposing QB behind the line of scrimmage more than any other team in the league.

Ben Roethlisberger playing at home should be more comfortable. While he believes Big Ben will be forced to watch large stretches from the bench as Cleveland’s running game eats up the clock, this should be a Steelers win.

Get +500 odds on the Seahawks to score at least once today in NJ right here. In PA, take advantage of this great offer here.