It’s time for 2021 New Year’s resolutions, and the New York Knicks are actually serious about keeping them this time!

The New York Knicks have an awful track record when it comes to New Year’s resolutions.

I know because I can relate. Every year, I set the same goals or something similar. I’m going to read a certain number of books before my birthday in March. I’m going to cut down screentime and social media except for work purposes. Most important of all, I’m going to give up bread once and for all.

Cut to three months later, and I’m glued to Twitter having an argument over how Uncle Buck is superior to Planes, Trains and Automobiles and anyone who says otherwise is wrong. During this argument, I’m scarfing down enough pizza that the Teenage Mutant Ninja turtles are asking if they can come over.

The books I promised I’d read, meanwhile, are collecting dust on the shelf.

Anyway, where was I?

Oh, right. The above scenario is 100% accurate when it comes to the Knicks. It’s the same story every year. Things are different. The right players are finally here. The coaching is fixed and the front office is top-notch. 20 years later, it’s no wonder fans are impatient.

Except this year does feel different. The Knicks are 2-2 in the young season and even with some growing pains, the team looks motivated. Tom Thibodeau is selling a culture that the young New York Knicks have bought into full force.

As we enter the New Year, it’s important to keep the momentum going. If New York follows these simple New Year’s resolutions, Madison Square Garden may be NBA Eden. 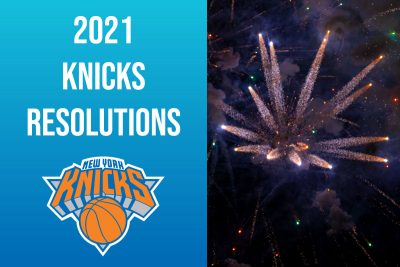 1. Commit to a plan for RJ Barrett

We all know RJ Barrett can ball. The New York Knicks took him with the No. 3 pick in 2019 for that very reason. Though still somewhat raw at just 20 years old, Barrett absolutely has the talent to succeed in today’s NBA.

However, the Knicks continually make Barrett’s path to success tougher. Yes, he’s got the versatility of a Swiss Army knife, but diving headfirst into it was never the right approach with him.

So, what to do with the former Duke Blue Devil? He can play both guard positions despite not being a strong shooter, and he has the athleticism and defense to be an effective wing too. His defense needs work, but isn’t beyond repair.

Simply put, all Thibodeau has to do is commit Barrett to one position and let him do the rest. His free-throw shooting has clearly improved, and I even wrote about how he already has more confidence with the ball this season.

Don’t let his streaky play get you down. Once the Knicks commit RJ Barrett to a single role, he and the team will only enjoy more and more success.

2. Acquire a star at the deadline

The New York Knicks have a star power problem. If you look at their track record the last two decades, adding superstars hasn’t quite worked out. Amare Stoudemire’s injuries caught up with him. Carmelo Anthony proved too one-dimensional. Stephon Marbury…well, he was Stephon Marbury.

To put it bluntly, being a star basketball player in New York isn’t much different from driving to Florida and stopping at South of the Border. It’s fun in the beginning, but the honeymoon is over quicker than anyone anticipates.

But if the Knicks are as serious as president Leon Rose and Thibodeau claim they are, adding some star power is key. The team has loads of tradeable contracts, especially if Rose and general manager Scott Perry can sell high on Julius Randle. New York also has some draft capital to work with, so adding a star isn’t necessarily a fool’s errand.

That said, who should the team pursue? Ian Begley of SNY reported Sacramento Kings guard Buddy Hield is indeed on the block, but no deal appears close. Minnesota Timberwolves center Karl-Anthony Towns is a possibility, but he’s been critical of Thibodeau in the past.

One way or another, Thibodeau told Marc Berman of The New York Post that adding a star is “critical” for the New York Knicks. If the team wants this rebuild to succeed, adding a star by the deadline needs to be top priority.

3. Most important of all, be patient

We New Yorkers don’t do well with waiting. Be it a line at Prince Street Pizza or the 4-train being delayed because people don’t understand the meaning of “There’s another train directly behind this one,” we basically expect a magic button to fix every inconvenience.

Such has been the New York Knicks for the last 20 years. No real progress can be made due to the impatience of someone we all know, but won’t name in this piece.

This year will be no different. Yes, the Knicks are playing with a different energy about them, but make no mistake. This isn’t a playoff team. The Flint Tropics could show up to MSG for an exhibition game and probably keep it close even if Jackie Moon committed 50 turnovers.

Mark my words, long-suffering Knicks fans. This time, it’s for real. Thibodeau’s passion on the court is infectious. The team is motivated to finally bring New York basketball back to what it was. Hell, for all we know, Spike Lee and Michael Rapaport may already be writing the 30 For 30 about the New York Knicks’ rebirth.

None of that comes true unless everyone from ownership to fans to even players is patient with the rebuild. These things take time, and the winning will mean that much more if we just hurry up and wait for it to happen.

Now, if you’ll excuse me, I have a bunch of bread to throw out before Jan. 1.