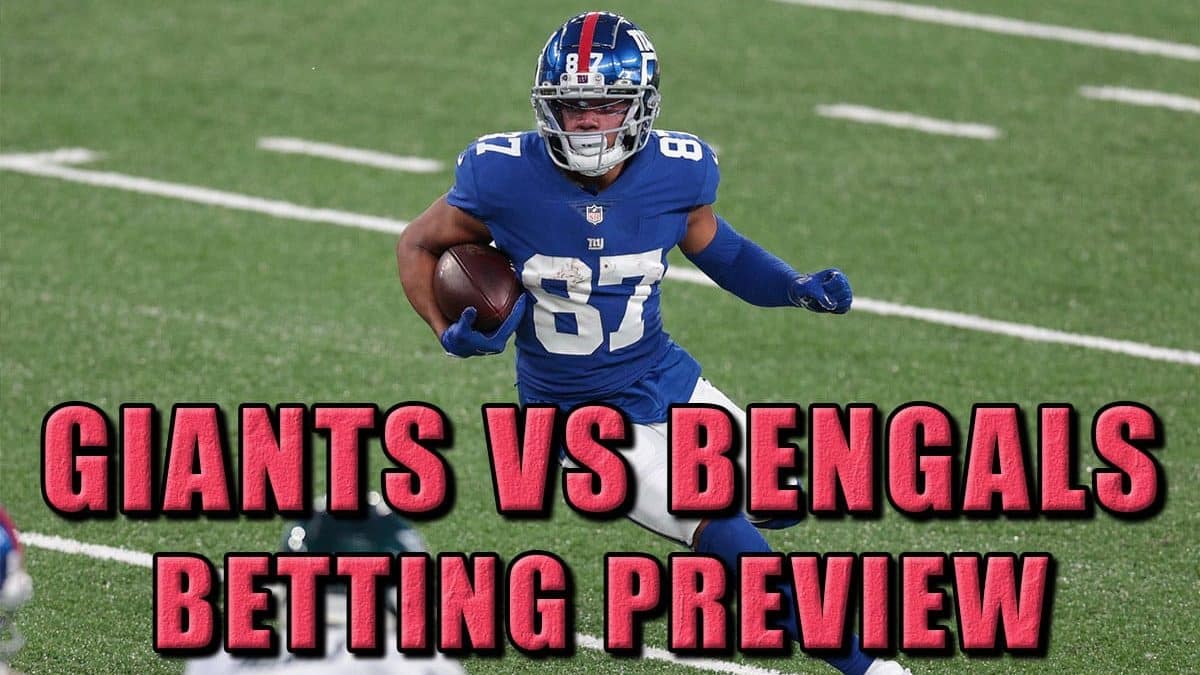 The Giants are coming off their bye week having won their last two games and are just one victory away from finding themselves atop the NFC East division. Will they ultimately get the job done against a weak Bengals team this Sunday afternoon? Let’s get into our Giants vs. Bengals odds, pick, and prediction.

Currently, the Giants are 6.0-point road favorites and are -265 on the moneyline in comparison to Cincinnati’s +225. The total is set at over-under 44.0.

The Giants are 3-7, but their record doesn’t tell the whole story. This team has remained competitive all year long and is starting to put the pieces together in more ways than one. Daniel Jones is improving, the offensive line is developing, the run game is decent even without Saquon Barkley, and the defense is remaining strong.

Big Blue’s average losing margin is just 7.9, and that’s with opponents like the Buccaneers, Rams, and Bears — ballclubs that are supposed to be much more superior.

That’s why I believe the Giants will ultimately oust a Bengals team that’s without starting quarterback Joe Burrow. The rookie tore his ACL and MCL in the Week 11 loss to the Washington Football Team.

The Giants are favored for just the second time this year, and although it’s a decent spread (6.0 points, per DraftKings Sportsbook), I believe they’ll ultimately cover and win this game by at least seven points.

Needless to say, the Bengals don’t sport that strong of a roster, and it’ll be even worse with either Brandon Allen or Ryan Finley under center. The Giants defense should be able to pressure the opposing quarterback all game long and force whomever it may be to make mistakes.

Big Blue’s offense, meanwhile, shouldn’t experience many issues going up against this Cincinnati defense either. The Bengals have struggled mightily when it comes to defending the run, so expect the Giants to establish their presence on the ground with both Wayne Gallman and Alfred Morris.

The Giants are the more talented team in this matchup, and saying they’ll win by at least seven points isn’t that significant of a stretch.

Thus far on the season, the Giants are 7-3 against the spread, while the Bengals are 6-4.

Bet the Giants -6.0 over the Bengals at DraftKings Sportsbook here.

Giants-Bengals Total Pick: Take the Under

Although the Giants offense shouldn’t struggle scoring points against this Bengals defense, it’s still not a fantastic unit whatsoever. Big Blue is currently 30th in the NFL with 19.5 points per game and the play-calling is inconsistent.

On the other hand, the Bengals are only scoring 21.3 points per game (26th in the league) and will be even worse on that front without Burrow, especially against this relatively strong Giants defensive unit.

If over-44.0 is going to hit, the Giants may need to score at least 30 points, a mark I just can’t see them reaching. New York has surpassed that total just once this season — against the Cowboys (worst scoring defense in the NFL) during a Week 5 loss.

Sure, five of the Bengals’ last six home games have hit the over, but four of those matchups were with Burrow under center. It’ll be a tad bit different with either Brandon Allen or Ryan Finley, to say the least.

Giants vs. Bengals Prediction: Take the Giants to Win Outright

If I’m taking the Giants to cover the spread as favorites, that only means I believe they’ll win this ballgame.

Again, the Giants are the more talented team in this game and have started to come together the last few weeks. Not to mention, they’ll be well-rested coming out of their bye week and shouldn’t experience problems defending a backup quarterback-led offense.

The defense likely succeeding against Cincinnati is something that’ll take the pressure off the offense, a unit that shouldn’t need to accomplish too much in order to win this game.

Needless to say, there are too many factors that are in favor of the Giants this Sunday, and they should ultimately notch the victory.

Bet the Giants to win outright at DraftKings Sportsbook here.

The Giants will enter this game motivated to notch their third consecutive victory and move into first place in the NFC East. Take them with the spread (-6.0) as well as on the moneyline (-265). Oh, and absolutely hammer the under at all costs.