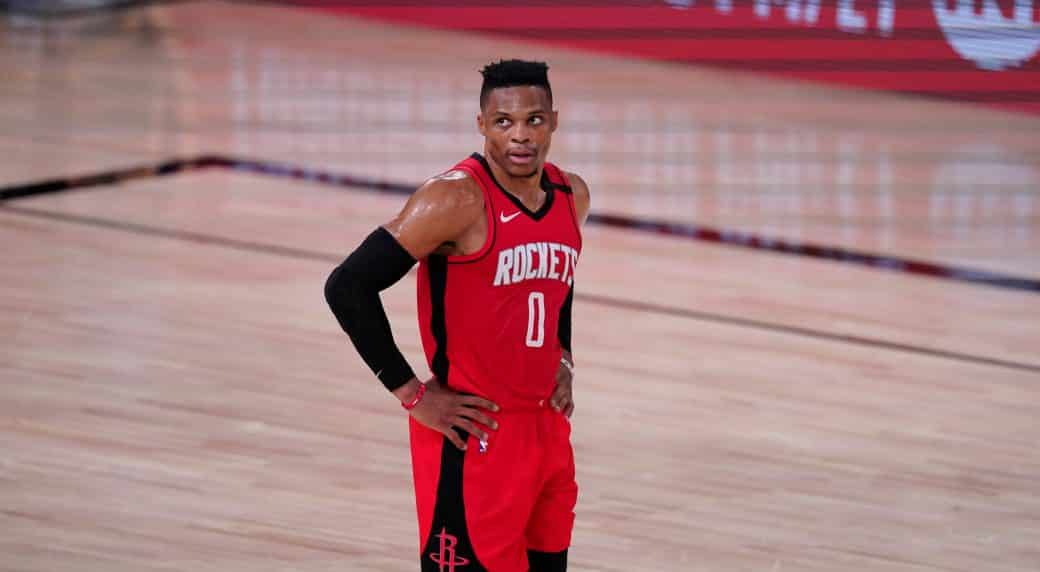 Russell Westbrook wants out of Houston and the New York Knicks need to make trading for him an immediate priority.

The New York Knicks need a star like Russell Westbrook and everyone knows it.

Okay, so the team is young and someone like RJ Barrett could be a future star. On top of that, the Knicks have two first-round picks this year. One of them can absolutely be the team’s future franchise point guard and set the tone for the Leon Rose era. There may not be star power now, but it’s coming, right?

That’s all fine and dandy, but my question to every New York Knicks fan is this: Why gamble on a rookie when you could have someone established?

For further context, the NBA trade market changed Wednesday when Shams Charania of The Athletic reported that Westbrook wants to move on from the Houston Rockets. Additionally, Kevin O’Connor of The Ringer reported New York and the Los Angeles Clippers as two interested teams.

Now, as important as it is for the Knicks to rebuild through the draft, the former MVP needs to become a priority now. Rather than gamble on a rookie from what’s considered a weak draft class, the Knicks can put their future into overdrive by simply adding an established star.

Why can’t that be Russell Westbrook?

You’ll recall that earlier this year, I supported the idea of the Knicks trading not for Westbrook, but Chris Paul. My main reasoning was Paul’s leadership was enough to help New York change the culture at Madison Square Garden. Paul probably wouldn’t win any rings with the Knicks, but teaching the young core (and maybe a rookie point guard) how to win would be enough to set the team on the path to contention.

Westbrook can have a similar impact as Paul, especially from a star power standpoint. He is a nine-time All-Star and former MVP. Westbrook is also the only player besides Hall of Famer Oscar Robertson to average a triple-double in a season. The main difference between the two is Westbrook has done this not once, not twice, but three times.

Throw in a pair of scoring and passing titles, and Russell Westbrook can absolutely make a difference on the young New York Knicks. The risks are there, especially his being 32 years old and having at least two years and over $85.5 million left on the deal, and that number rises to $132.6 million if he picks up his player option.

It’s also worth noting Westbrook could be starting to decline. His VORP has dropped every year since his MVP season in 2017. He averaged 27.2 points, 7.9 rebounds, and 7.0 assists per game for Houston last year, but his VORP was a meager 1.8. Westbrook also posted win shares per 48 minutes (WS/48) below .100 for the first time since his rookie year.

Except Westbrook was sharing the court with another star in James Harden, and the two’s ball-dominant styles simply did not mesh well together. In New York, Westbrook would be the star helping develop a young team.

Is there a deal to be made?

But will Rose make a deal? Remember, the last time the Knicks traded for an established star was when they acquired Carmelo Anthony a decade ago. New York saw him as the missing piece, and thus overpaid the Denver Nuggets to make a trade. Years later, despite Anthony’s individual success with the Knicks, the lack of postseason success still stings.

This time, however, things are different. Westbrook simply wants out of Houston whereas Anthony wanted a new contract and a new team. Additionally, the Knicks saw Anthony as the missing piece to a title run. This time, they would be acquiring a top-tier player only to make the team more competitive.

Even so, Houston isn’t going to trade Russell Westbrook for a bag of balls and conditional draft picks. Owner Tilman Fertitta won’t just give him away. Thus, given the weakness of this year’s draft class, New York should have no problem offering the No. 8 selection this year.

Maybe Rose can even include one of the picks acquired from the Dallas Mavericks in the Kristaps Porzingis trade. Perhaps Houston would also be willing to take Kevin Knox and/or Julius Randle.

The fact of the matter is the Knicks can make a deal for Russell Westbrook without having to give up too much. Given the state of the team, why not pull the trigger?

The way this writer sees it, the New York Knicks have two options. They can either trust Leon Rose to complete his rebuild through the draft, establish a new team culture under coach Tom Thibodeau, and hope some of the new youth alongside Barrett hits. This is what the team has done for the past several years to no avail, and fans are restless.

But by taking a Mulligan on this year’s draft and, rather, using that capital to acquire Russell Westbrook, Rose has half the battle won already. Westbrook’s motor rivals only Lightning McQueen’s. Even if the Knicks don’t win immediately, he alone would make Madison Square Garden’s atmosphere all the more exciting. As a leader, Westbrook’s insistence on holding himself and teammates accountable would give the young Knicks some direction.

He is getting up there in years. His three-point shooting is borderline abysmal and his overall range leaves something to be desired. Turnovers will always be a concern when he has the ball in his hands.

And it’d all be worth it.

Think of how well Barrett and Mitchell Robinson would play with a top-level point guard feeding them the ball. Think of how fast and fun the Knicks would be to watch even if they weren’t winning games. It’d be the early years of Mike D’Antoni all over again, just hope and excitement for better days ahead.

Knicks fans have waited long enough for a draft prospect to make an impact. It’s time to trade for a star who can change the team’s image in a New York minute.

If Russell Westbrook isn’t that player, then who is?