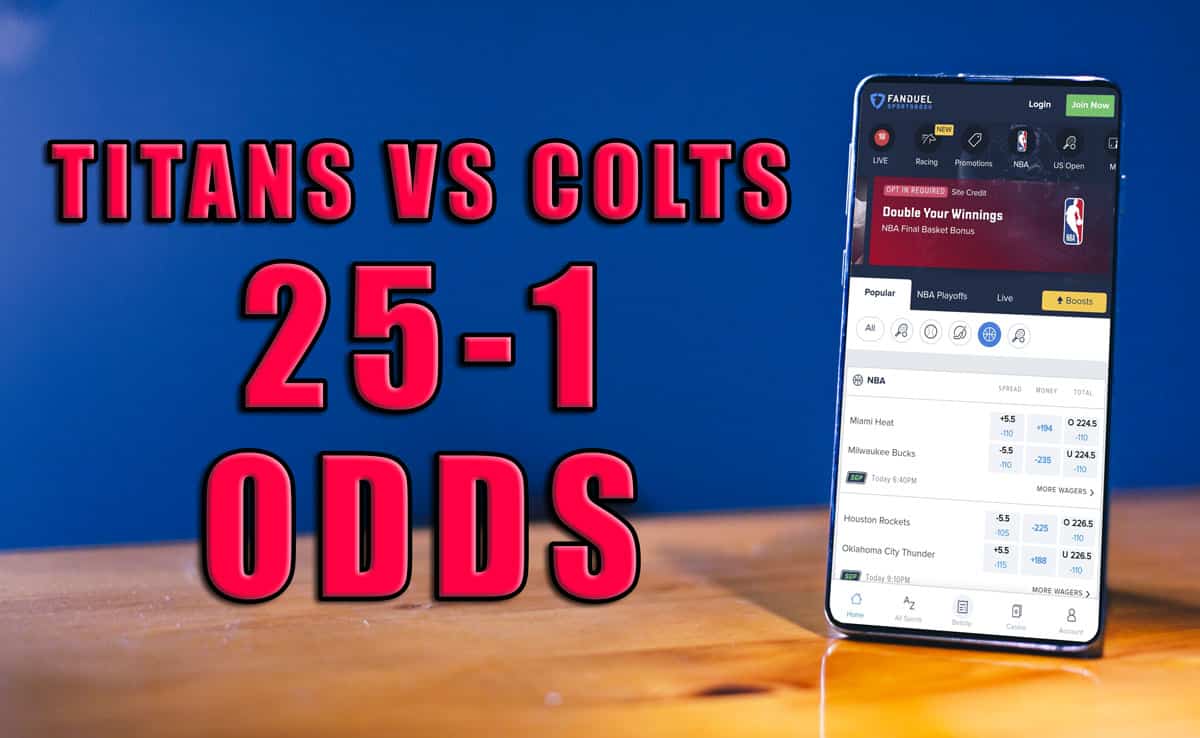 Week 10 in the NFL has arrived at FanDuel Sportsbook, and the action starts right away with the Indianapolis Colts and Tennessee Titans going head-to-head in a crucial AFC South Showdown on Thursday night.

To up the ante even more, FanDuel Sportsbook is offering a can’t-miss deal for new users on the game by offering 25-1 odds on either side.

New users of the FanDuel Sportsbook app will be able to bet either the Titans or Colts to win outright at amazing 25-1 odds. The bet is currently live and will remain that way until kickoff on Thursday night (8:20 p.m. ET).

This is an in-app promotional deal that carries a maximum bet of $5 (a $5 bet would earn you $125 in earnings) and is offered in New Jersey, Pennsylvania, Indiana, West Virginia, Colorado, Illinois, and Tennessee.

Get 25-1 odds on either the Titans or Colts to win with FanDuel Sportsbook here. If you’re in Tennessee, grab it here.

How to Get 25-1 Titans-Colts Odds at FanDuel Sportsbook

Here’s how to get this deal:

With the first-place Titans sitting at 6-2 and the second-place Colts sitting at 5-3, this matchup will be for the top spot in the AFC South division. This is a huge game for eventual playoff seeding as well, considering the Colts are now out of the current postseason picture after Sunday’s loss to Baltimore.

Per FanDuel Sportsbook, the Titans enter as 1.5-point favorites with the total sitting at 48.5. Over the last five times these division rivals have faced one another, the Colts have won outright in three games. The Titans won the most recent meeting (Week 13 in 2019) by a score of 31-17.

The Titans are coming off a 24-17 win over the Chicago Bears after losing two straight to the Steelers and Bengals. The Colts, on the other hand, have won two of their last three and employ the top defense in the league in terms of total yards allowed per game.

Get 25-1 odds on either the Titans or Colts to win with FanDuel Sportsbook here. Get it in Tennessee here.