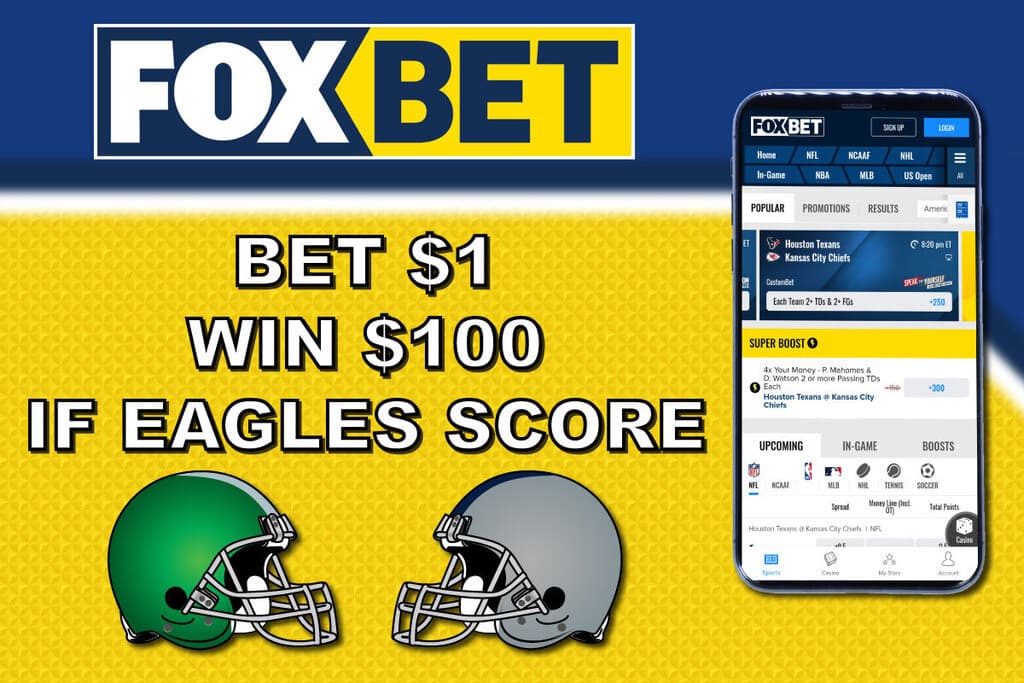 FOX Bet is offering new players in Pennsylvania a can’t-miss opportunity ahead of the Eagles-Cowboys game on Sunday night. With Dallas’ defense playing at a historically poor level, FOX Bet is giving bettors the chance to cash on absurd 100-1 odds if the Eagles manage to score at least one point (well, two points) in this Week 8 primetime clash.

Grab 100-1 odds on the Eagles to score at least once against the Cowboys at FOX Bet by clicking right here.

With this no-brainer offer from FOX Bet, new PA bettors can sign up, wager $1, and win $100 if the Eagles register points against the Cowboys.

While it’s absolutely outrageous to catch 100-1 odds (get it here) on any NFL team to score against any NFL defense, the Cowboys are most certainly not just any NFL defense. In fact, they are the game’s worst defense. Some quick notes ahead of this Eagles-Cowboys matchup illustrate to help illustrate the point:

That very same defense traded edge rusher Everson Griffin on Tuesday and is also in the process of parting ways with some other high-profile defensive veterans. In a word, the Dallas defense has been a disaster. That’s why the Eagles, a team that has scored no less than 17 points and is averaging 26 points per game over its last four contests, is a virtual lock to score on Sunday night. Expected to help the cause is that the Eagles appear to be in line to get back the services of offensive lineman Lane Johnson and Jason Peters, along with rookie wide receiver Jalen Reagor.

If that isn’t enough for you, just know that the market odds of the Eagles scoring at least once against the Cowboys would normally be set at -10000. This means bettors would need to wager $10,000 to win $100.

Here’s how bettors new to FOX Bet who are located in Pennsylvania can grab this offer.

Get the process going by clicking right here. After the sign up process is completed, make a $10 deposit.

Then, make your first real-money wager for $1 at 100-1 odds on the Eagles to score against the Cowboys.

This offer is accessible through the app’s home page (along the top scroll of the app) and the promotions tab. The odds also live within the expanded betting options in the Eagles-Cowboys odds.

This offer, which is capped at $1, will payout at 100-1 odds, within 24 hours of the game’s completion, as long as the Eagles score at least one point.

Grab 100-1 odds on the Eagles to score at least once against the Cowboys at FOX Bet by clicking right here.