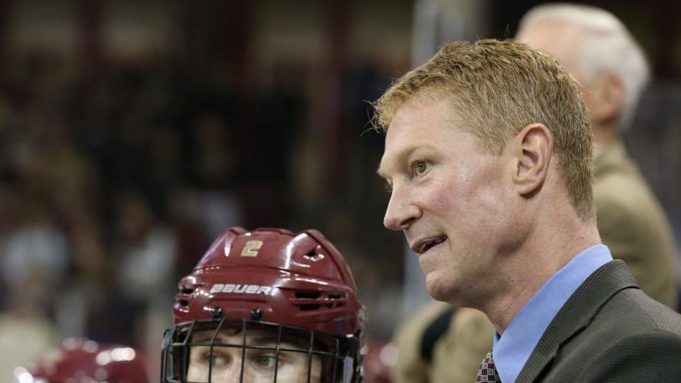 The New York Rangers will be hiring BC associate head coach Greg Brown according to a report by Jeff Cox of the New England Hockey Journal.

The New York Rangers coaching puzzle is slowly coming together. Jeff Cox of the New England Hockey Journal has indicated that BC associate head coach Greg Brown will be leaving the college to join the Blueshirts coaching staff.

According to multiple sources, associate head coach Greg Brown is leaving Boston College to join David Quinn’s New York Rangers staff. Have to assume Brendan Buckley or Mark Dennehy will be the most likely replacements at BC.

Brown was promoted to associate head coach in September 2012 while under then head coach Jerry York. He worked closely with the BC Eagles defense with a priority on the special team units. This could be a great help to a struggling Ranger power play.

Brown began his coaching career in August of 2004 after completing a 12-year professional playing career.

As a coach with the Eagles, Brown won six Hockey East Tournament titles and three national titles (2008, 2010 and 2012) in five Frozen Four national championship-game appearances.
He was a teammate of David Quinn’s on the 1985-86 USA World Junior team.

In his playing career at BC, Brown was a two-time Hobey Baker finalist.

Brown has a connection with some current and past Ranger players. When attending Boston College both Chris Kreider and Kevin Hayes played under Brown for all four years they played hockey at the school.

Brown was a teammate of former New York Ranger and 1994 Stanley Cup winner Brian Leetch. He was also teammates with Leetch and goaltender Mike Richter on different USA teams.