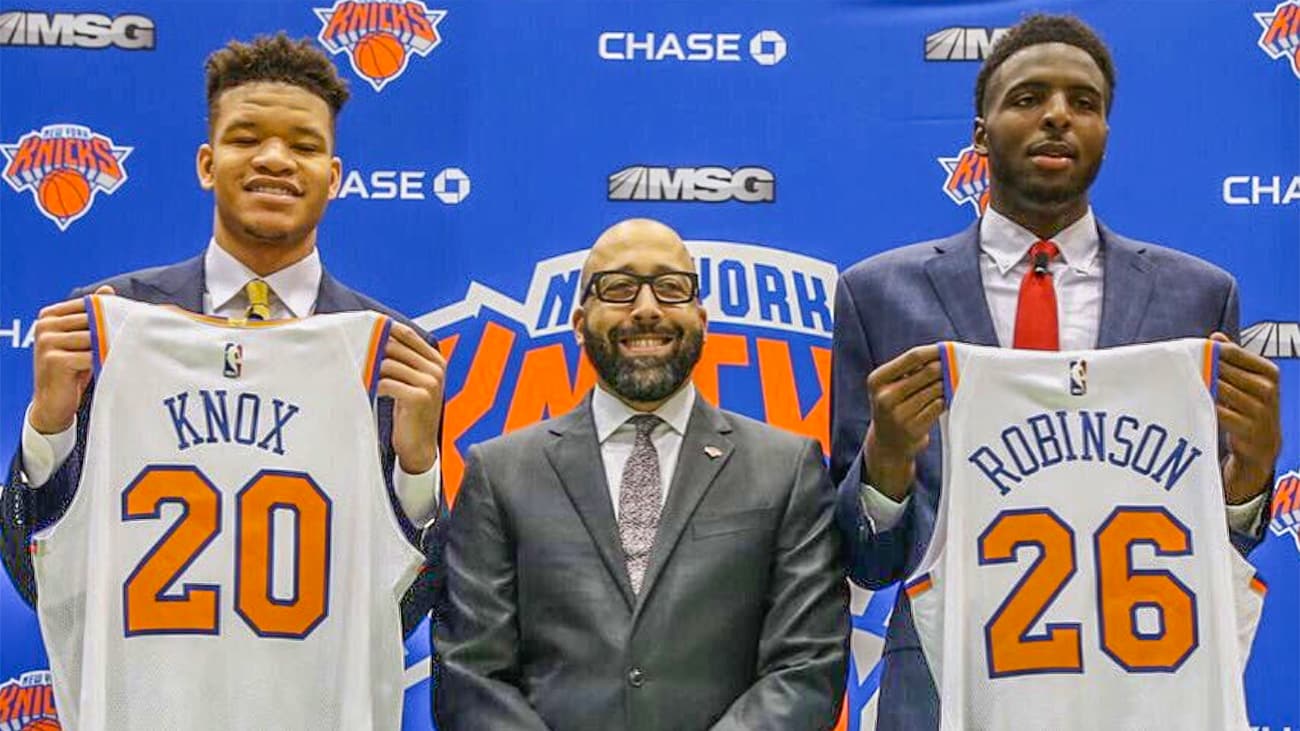 The 2018 NBA Draft is in the books, and the New York Knicks made some intriguing picks. Here’s how they graded.

The New York Knicks are always at the center of some draft, trade, and free agency rumor when a landmark time of the NBA year comes around. Thursday was the 2018 NBA Draft, and New York was caught up in talk about trading up for prospects like Mo Bamba and Luka Doncic.

Fans were excited about the possibility of jumping up to the fourth pick, potentially and getting one of the draft’s top talents. Still, New York was willing to stay at nine because they felt like they had their guy and he’d be there. That guy was former Kentucky star Kevin Knox and get him they did.

Here’s a look at the grades for each prospect based on strengths, weaknesses, and player fit. Let’s start with Knox.

If you’re a real Knicks fan, not some clown who overreacts and boos every pick by default, you have to love the way Knox shrugged off the haters on Thursday. The 18-year-old set a tone when he reminded us that Kristaps Porzingis was booed on draft night. “Look where he is now,” quipped the newest Knick. Pretty good rook.

Knox led Kentucky in scoring at 15.6 points per game and started in all 37 of their games. Unfortunately, despite yet another preseason top-five ranking, this was a disappointing season for the Wildcats. John Calipari’s squad finished 26-11 after a Sweet 16 loss to a shocking Kansas State team.

Knox won the front office over in a group workout. That’s not exactly a surprise. At 6-foot-9 and with a wingspan just shy of 7 feet Knox looks like a workout warrior. Once Knox fills out that frame, he weighed in at 213 pounds at the draft combine, the move to power forward will become easier.

Sixty-two percent of Knox’s FGA were from two-point range as he struggled with his three-point shot. His shooting numbers at Kentucky were average in general. According to Hoop-Math, Knox was 40.5 percent on two-point jumpers compared to 34.1 percent on threes. The Tampa native was in just the 44th percentile of efficiency on catch and shoots, per Synergy.

So his shooting numbers stink, but he’ll end up as a better shooter than that, and the Knicks didn’t draft Knox for what he did last year at Kentucky anyway. They drafted him for what they think he can do down the road. He projects as an impact player on both offense and defense. Dare I say, a 3-and-D guy?

For the second straight season, the Knicks drafted one of the youngest players in the draft in the first round. Knox is still 18 years old for a couple more weeks. Like Frank Ntilikina, the sky seems to be the limit for Knox due to his freak athleticism and raw skills.

This wasn’t exactly a stunning pick. Multiple media outlets were reporting on draft day that Knox to the Knicks was in the cards. Villanova’s Mikal Bridges, the presumed favorite for months, was all of a sudden out and Knox was in. But Bridges was the easy pick. You know what you’re getting with him.

A large part of the appeal of Knox is the unknown. That’s why Scott Perry and Steve Mills deserve so much credit for this pick. Taking an “upside guy” with their first pick of the rebuild is a bold move. Based on what we think Knox could end up being, on both sides of the court, this pick deserves a high grade. Hopefully, we’re not reviewing this draft in five years with complete disdain.

If you thought Knox was a risk, wait till you get a look at second-round pick Mithcell Robinson.

What a story. Mitchell Robinson was a McDonald’s All-American and a five-star high school recruit last season. He was billed as the biggest recruit in Western Kentucky history. Unfortunately, he never played for the team after being suspended indefinitely for violating team rules.

Rather than transfer to another school, Robinson opted to skip college and prepare for the 2018 draft. He was supposed to attend the combine, but he withdrew that day before teams could get a look at him. Sometimes having a little mystery around you can benefit you in the draft (see Thon Maker in 2016) but in Robinson’s case not so much.

Robinson is an elite athlete who rebounds, protects the rim, and finishes strong. But he struggles to do much else on offense, and his fundamentals are lacking. He’s turnover prone. Maybe he should’ve gone to college over something?

Robinson’s stock took a hit for the draft, and the Knicks benefited from it. The thirty-sixth pick is the right spot to take a gamble. Especially on a guy like Robinson who is being compared to DeAndre Jordan and Hassan Whiteside.

New York had nothing to lose by drafting Mitchell Robinson, but other teams passed on him because of the stigma surrounding him. It’s a low-risk, potentially high-reward situation for the Knicks. If they get anything from him, then Perry and Mills look like geniuses.

NEXT: Knicks, Knox fit like a perfect basketball glove