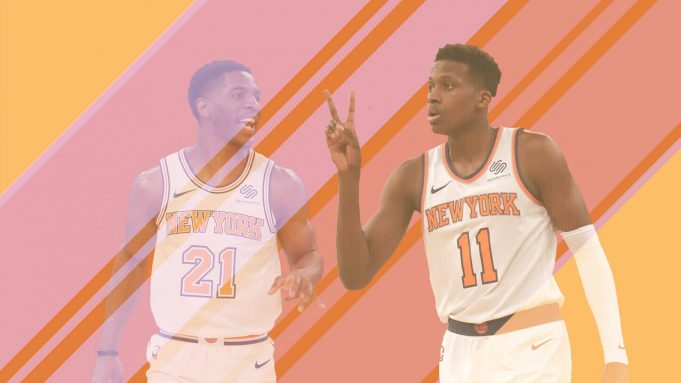 The New York Knicks must remain focused on the long-term plan for the organization. Evaluating the young talent on the roster, including rookies Frank Ntilikina and Damyean Dotson, is going to be a top priority this offseason.

The New York Knicks have a bevy of young players on the roster. The front office is tasked with finding who fits into the long-term vision for the team. Recently, Frank Ntilikina has been playing much more off the ball, leading some to wonder if fellow rookie Damyean Dotson will be the odd man out.

According to ESPN’s Ian Begley, several teams around the league are discussing the possibility of acquiring Dotson in the offseason. Obviously, the Knicks willingness to trade Dotson would rest largely on what they are getting in return for the second-round pick out of Houston. Dotson’s value isn’t quite certain at this time, but the chances of the Knicks getting anything higher than a second-round pick are unlikely.

But it’s also unclear if they would even be willing to trade Dotson for a second-rounder. That could depend in part on what the plan is for Ntilikina going forward. With the additions of Emmanuel Mudiay and Trey Burke, Ntilikina has been getting more time at shooting guard—Dotson’s natural position. But the organization has shown a willingness to play guys slightly out of position all season, so Dotson occupying more of a swingman role wouldn’t be a shock.

A lot can change by the time the offseason arrives, but trading a promising young player is anything but foreign to the Knicks. Earlier this season, they parted ways with Willy Hernangomez after it became clear that he wasn’t in the long-term plans for the organization.

Dotson’s future with the team could depend on Ntilikina’s new role, but there is a lot more to it than simply Frankie Smokes playing point or shooting guard.. For now, we’ll just have to wait and see.